Bōsōzoku: A Spectacle of Speed and Style

7 minute read
The kids run wild. Free and unbridled. Like a pack of feral dogs let loose on city streets at dawn. A violent, oil-spitting blur of black leather, glossy paint, and Kanji.
Upstanding citizens holding their briefcases or handbags or groceries stop and stare, startled, mouths gaping, eyes open wide like they’ve been taped open, scared-shitless of these hooligans but unable to look away from a spectacle so rich with speed and style. Khaki-clad deers caught motionless and dumb in the cycloptic headlights of highly-modified, impossibly-flamboyant motorcycles. 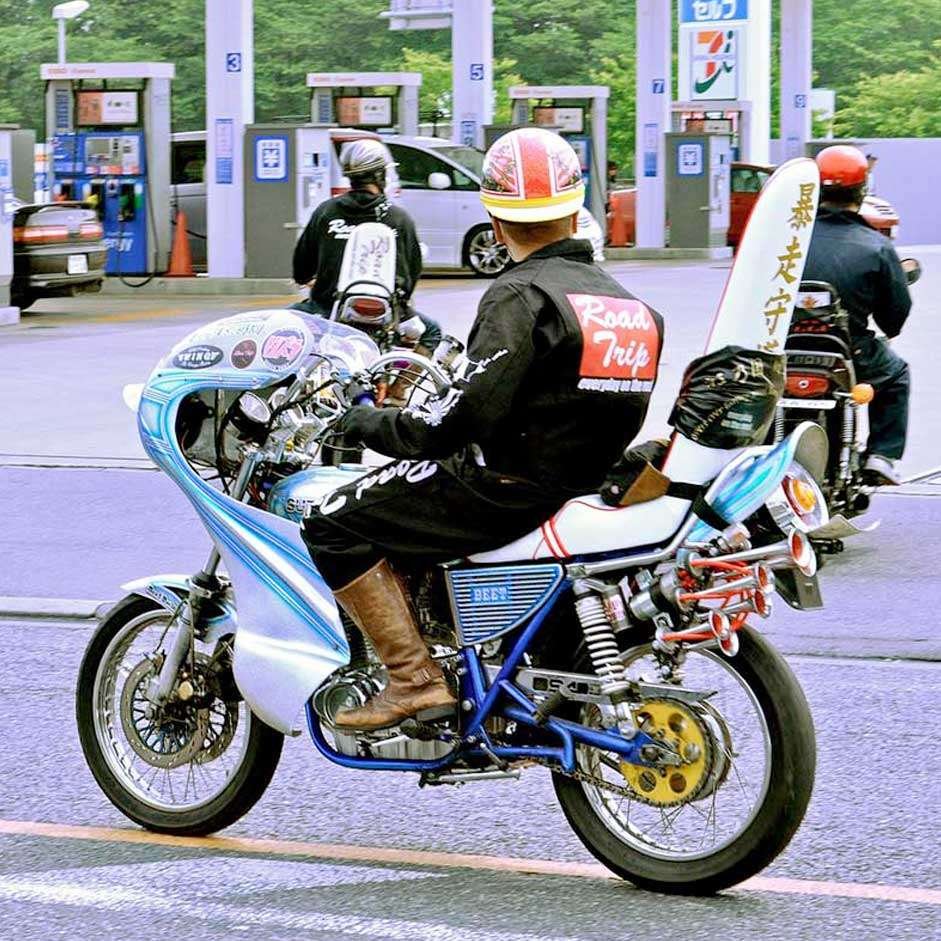 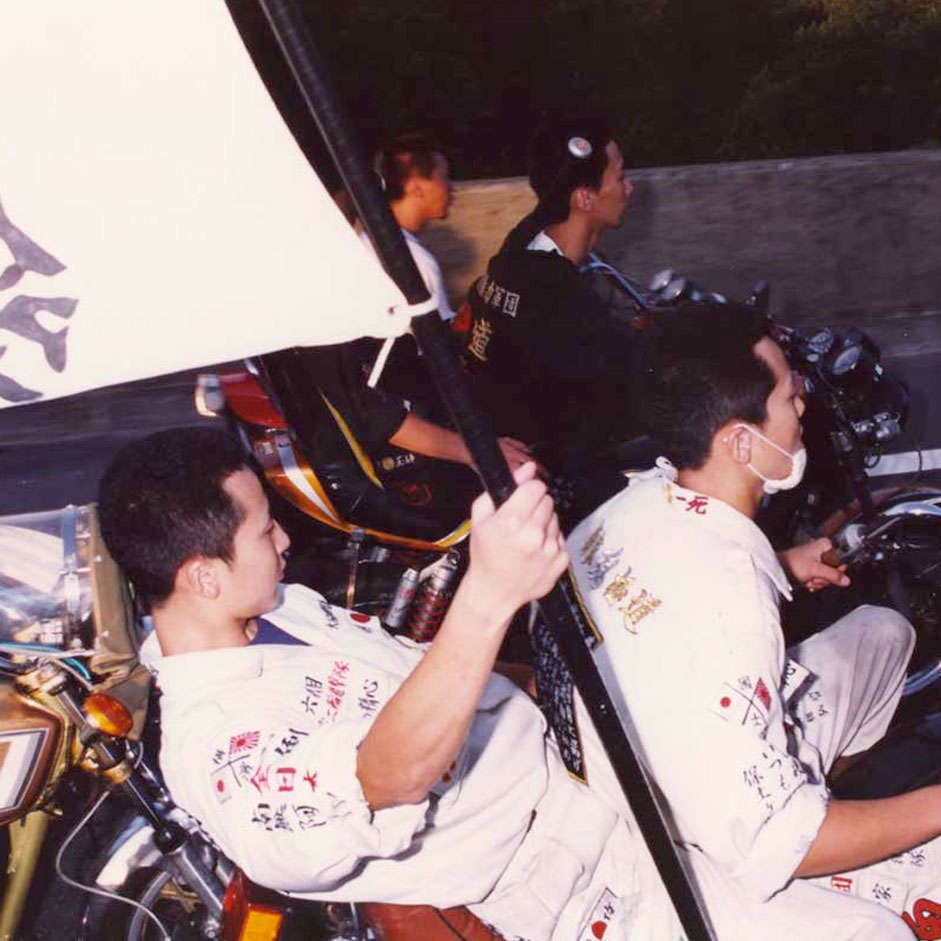 The spectacle is Bōsōzoku. A Japanese youth subculture defined by their unique fashion sense, their customized motorcycles and their reckless and oftentimes violent public behaviour. Literally translating to "running-out-of-control tribe”, Bōsōzoku are regarded as a criminal group. They are known to be surprisingly well organized, despite generally only having a handful of members above the age of twenty.
Bōsōzoku have clear cut rules, uniforms, symbols, and other marks of gang-like organization. Certain groups even have membership fees, initiations and internal punishment protocols. Naturally, they make up a large proportion of Japanese criminal activity including vandalism, rampant road traffic violations and have been a known pool for Yakuza recruitment for decades. 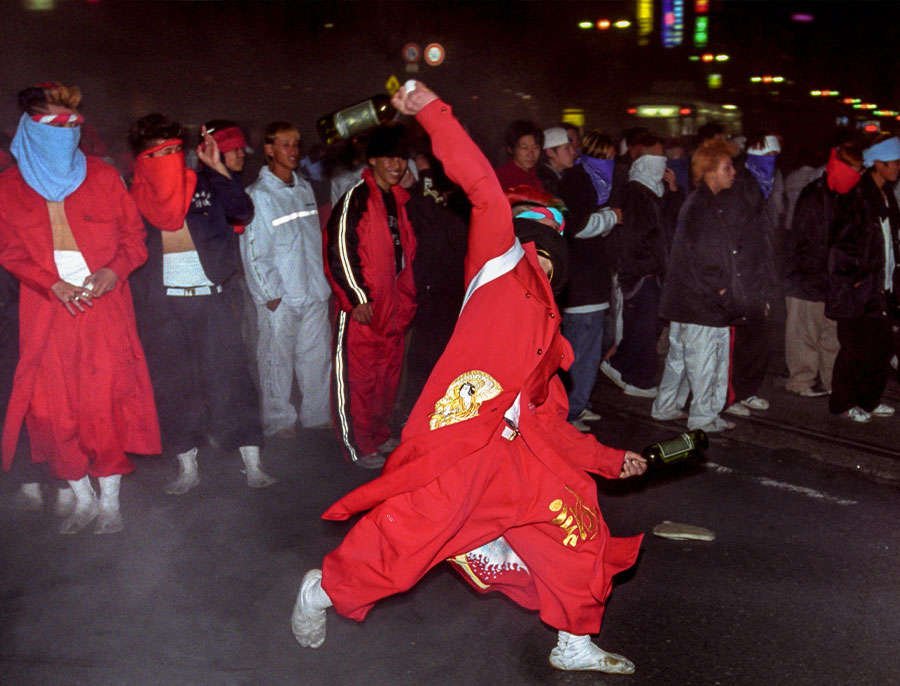 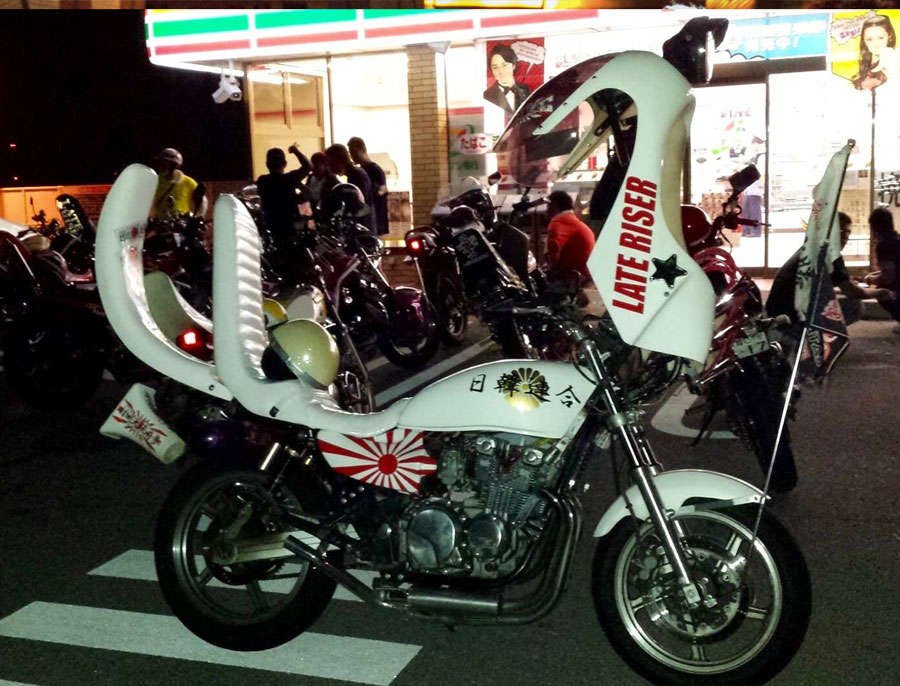 But damn do they have pizzazz. The peculiar and showy way in which bōsōzoku are known to modify their motorcycles is called Kaizōsha. Imagine tossing a vintage American chopper and a classic British café racer into a Build-a-Bear stuffing machine and watching in giddy suspense as a sacrilegious lovechild rolls out the other side.
Handlebars up high like ape-hangars, sorta, and pinched inward (known as shibori). A full race fairing, sorta, but mounted high and angled upwards making the machine look like it’s perpetually climbing a hill. A tuck-n-rolled back seat that’s been sorta “free-transformed” to be taller than any natural human back. A shugo exhaust system that could drown out the sound of an air raid. Oh yeah, and they cover their license plates in aluminum foil. It’s a three-way French kiss between Harley Davidson, Norton and Hello Kitty.
And then there’s the fashion. Loosely inspired by WWII Kamikaze fighter pilots (more on that below) with a touch of American greaser, Bōsōzoku style traditionally involves oversized boilersuits similar to those of manual laborers, or leather military jackets. Combined with baggy pants, tall leather boots and kanji slogans, this look became known as tokkō-fuku ("special attack clothing”).
Typical accessories include hachimaki headbands, surgical masks (even pre-covid), rounded sunglasses, tasuki sashes, and patches displaying the rising sun of the Japanese Imperial Flag. 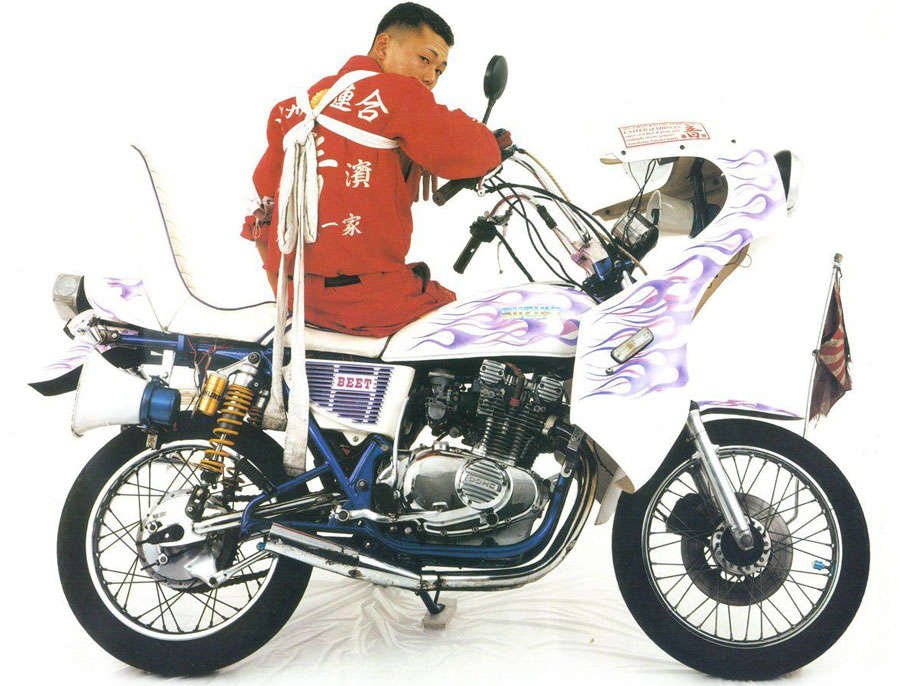 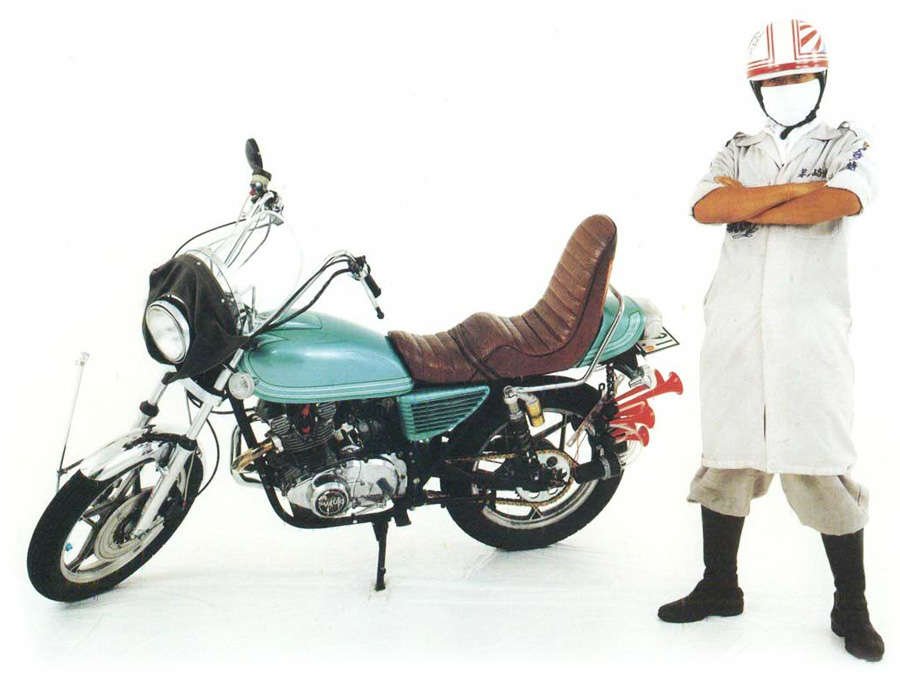 It’s this parade, this cavalcade of chaos, that rips through towns, weaving in and out of traffic, running red lights and speeding for the thrill of it. And just like an American MC, the leader rides up front, the head of the dragon. Japanese police call these processions Maru-Sō and occasionally dispatch cruisers to trail the groups to prevent possible incidents, which, have, in the past, included: riding very slowly through suburbs at speeds of ten kmh, revving their engines while waving imperial Japanese flags and starting fights that, have also, in the past, included weapons such as wooden swords, metal pipes, baseball bats and molotov cocktails.
“The bōsōzoku world is a very scary place,” Kazuhiro Hazuki, a former bōsōzoku gang leader told Vice News in 2015, who was a teenager when he first joined. “Even at that age, the level violence is astonishing.” As the former 21st leader of Chiba’s Narashino Specter chapter, Hazuki recalls the violence with a mixture of fondest and regret.
“We used to hide on the sides of Route 357 with our weapons,” he said. “Then we’d throw a rope across the street so when the other gangs arrived, we’d pull the ropes tight and trip their bikes. Then we’d attack them.” Adding: “you gotta prey on them before they prey on you.” 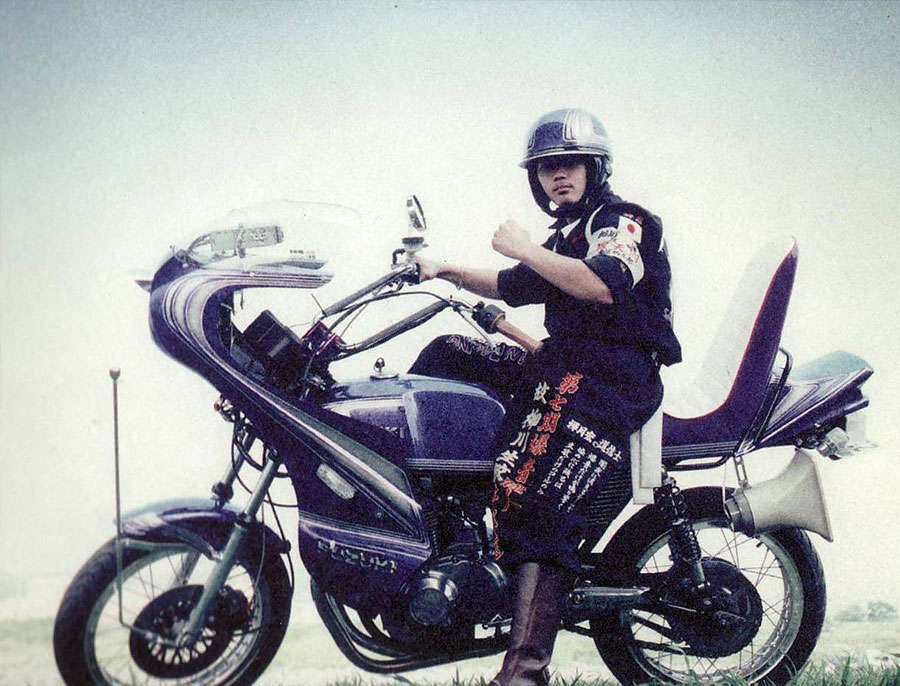 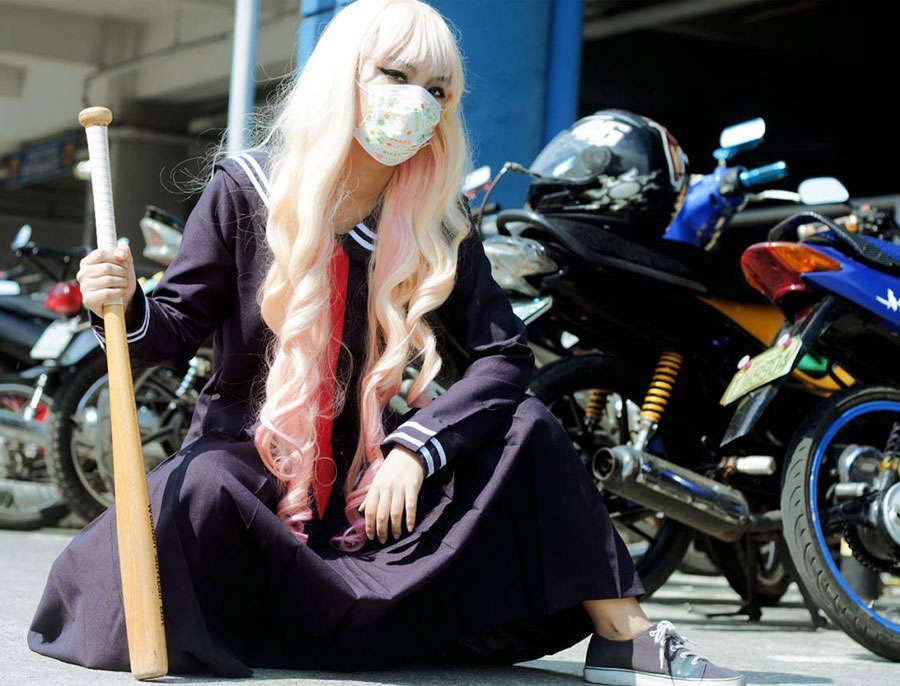 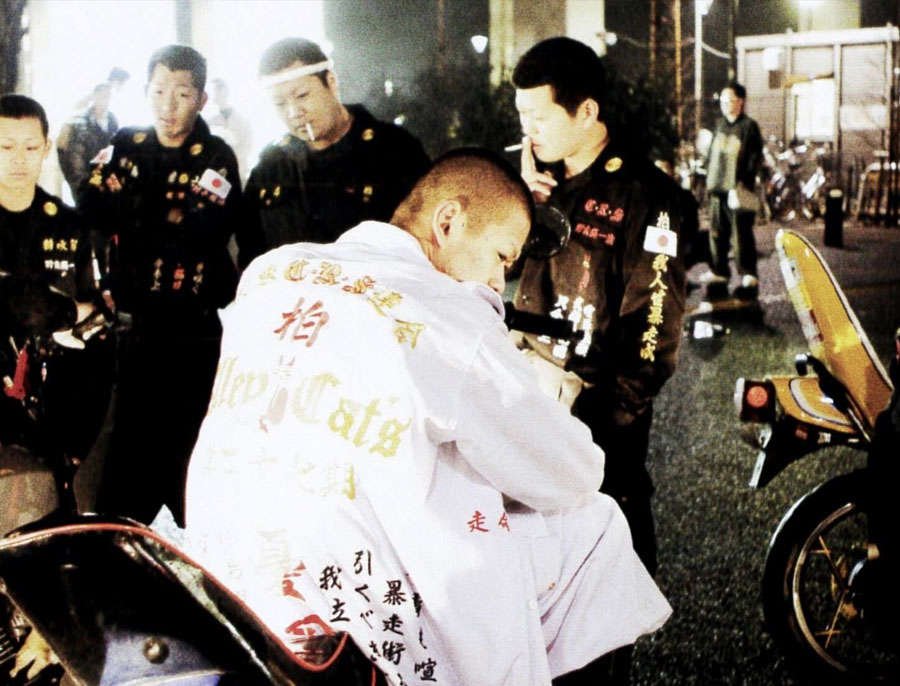 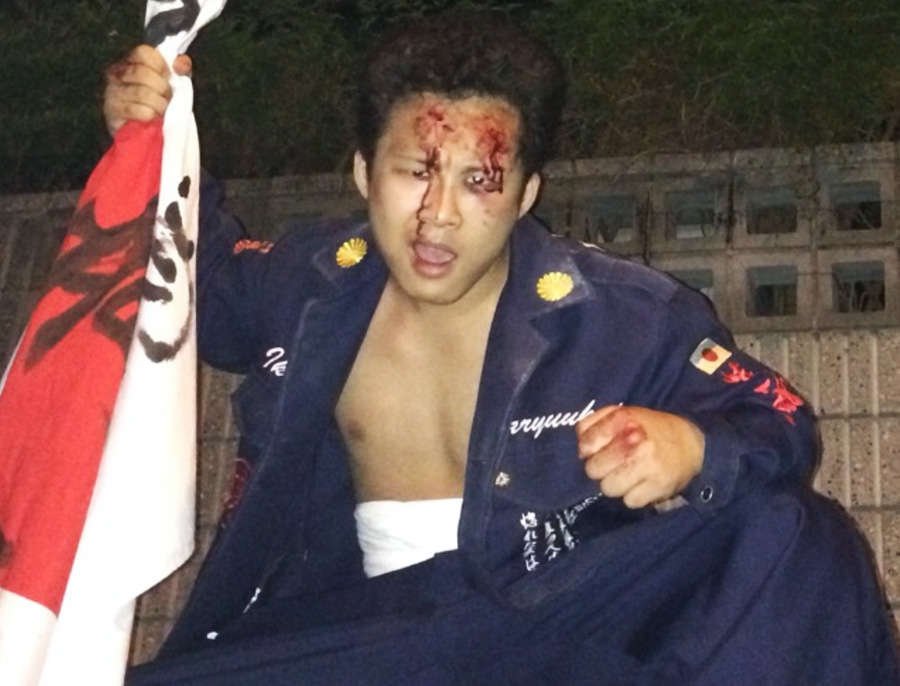 To better understand the impulses of the bōsōzoku, one needs to look back in time to WWII. Japan was struggling to compete with the might of the United States military in the Pacific theatre. The Rising Sun Empire needed a better way of destroying American aircraft carriers, which were usually heavily guarded by both top-notch American fighters and also anti-aircraft guns. Enter Kamikaze pilots.
Not only was flying a fighter jet into an aircraft carrier an effective way of taking out a massive amount of enemy resources at one time, the willingness of a Kamikaze pilot to sacrifice himself for his country had a profound psychological impact on the invading forces. It was the ultimate display of loyalty to the emperor.
They would often fly in squadrons to instil an element of peer pressure between pilots. It was hoped that this would deter the less resolute from flying off and not completing their fatal mission. So, there's a bunch of restless uniformed young men travelling in speeding packs looking for a fight. Sound familiar? 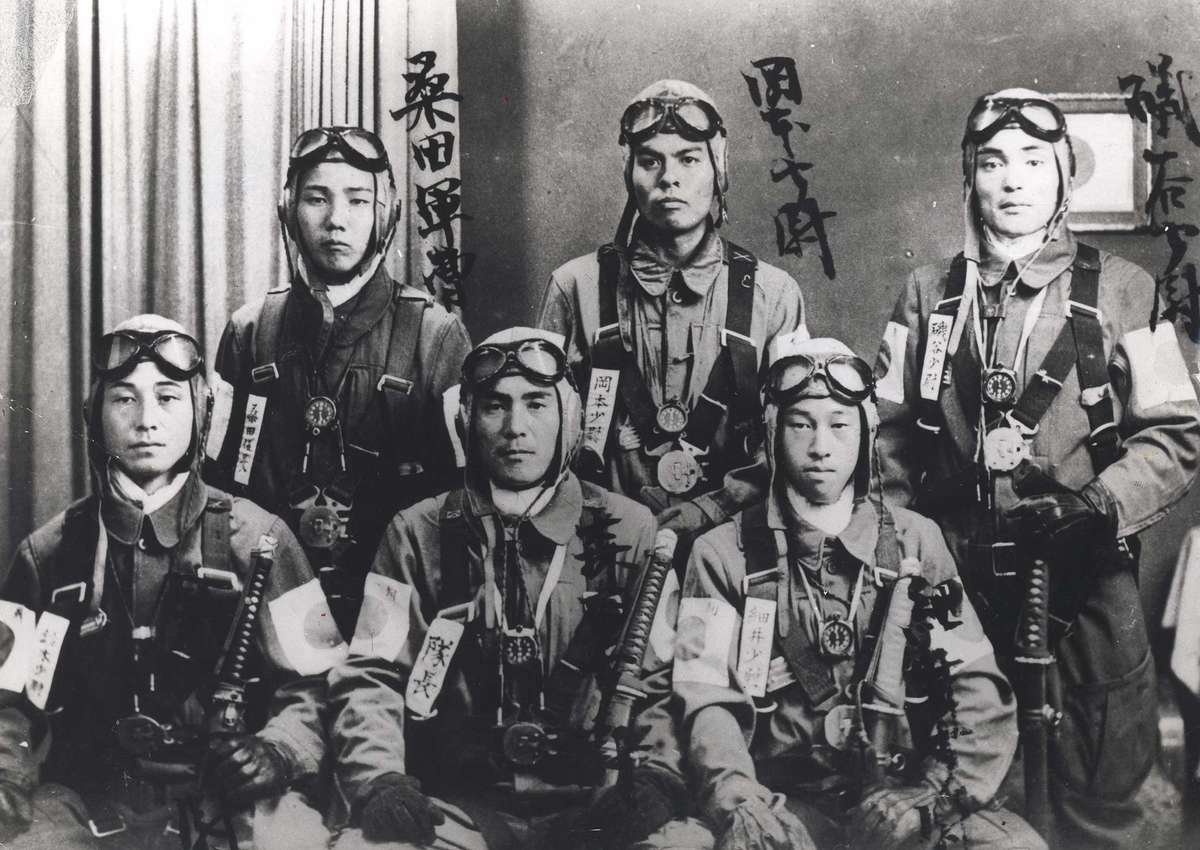 When the war came to an abrupt halt, handfuls of kamikaze pilots returned home to the humble, industrialized margins of Japanese cities. Those who returned having failed their mission due to psychological reasons (ie. retreated/deserted) were imprisoned and sometimes even executed. The pilots who never competed a mission due to mechanical error or the war just happened to end before they could attempt a kamikaze run, were, essentially, asked to reenter society and embark on a normal day-to-day life. As if.
Accustomed to a life of danger and extremes, the former Kamikaze assimilated into post-war Japanese society about as well as oil mixes with water. Eventually, these veterans banded together and formed groups known as Kaminari Zoku (meaning Thunder Tribes). Again, like American MCs, these post-war outcasts spent their time riding recklessly around Japan in packs, reforming their lost sense of camaraderie and thrill. 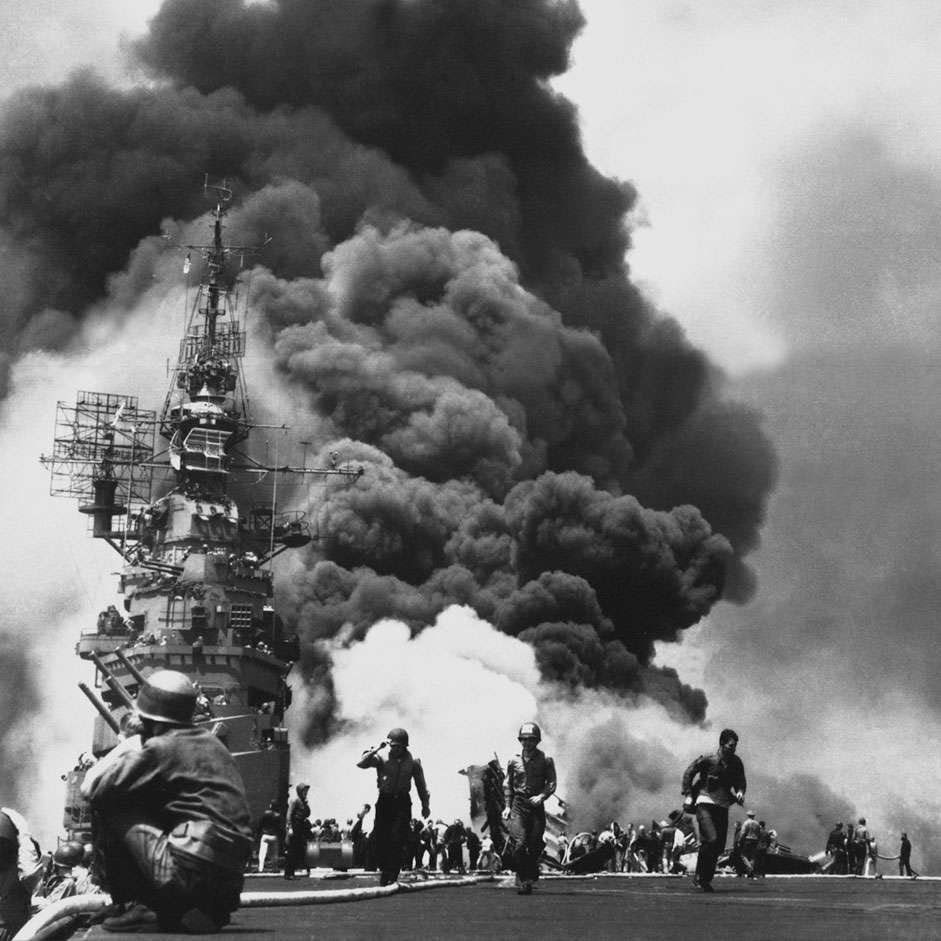 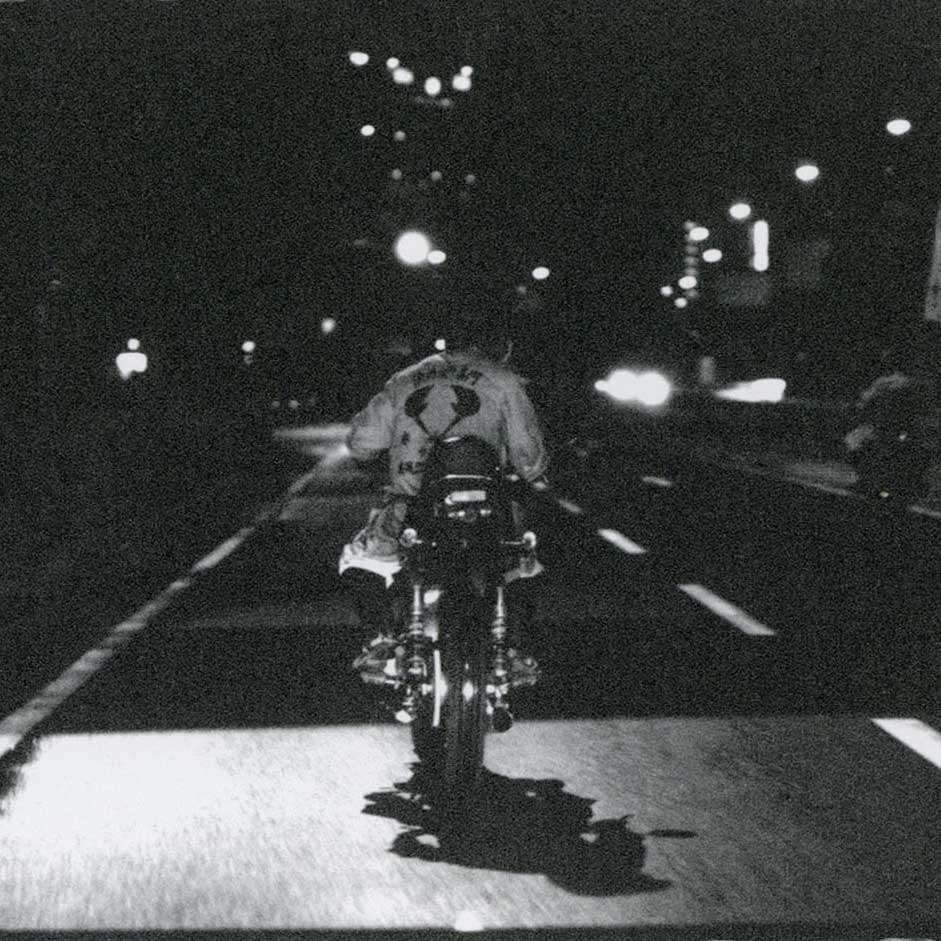 As this war generation aged into retirement, the disenfranchised Japanese youth of the late 60s and early 70s began to double down on the rebellious outsider culture of these rambunctious Thunder Tribes. With Japan refining its post-war politics and opening itself up to the rest of the world, this new generation of Kaminari Zoku focused on maintaining traditional Japanese values and codes of conduct.

Popularity skyrocketed throughout the 1980s and peaked at an estimated 42,510 members in 1982, making bōsōzoku the prevailing form of youth delinquency in the country. They would embark on truly epic massed rides, cruising together at slow speeds on major expressways, blasting through tolls without paying, smashing car windows, threatening other motorists who got in the way of their rampage and blatantly ignored any attempt by police to detain them. 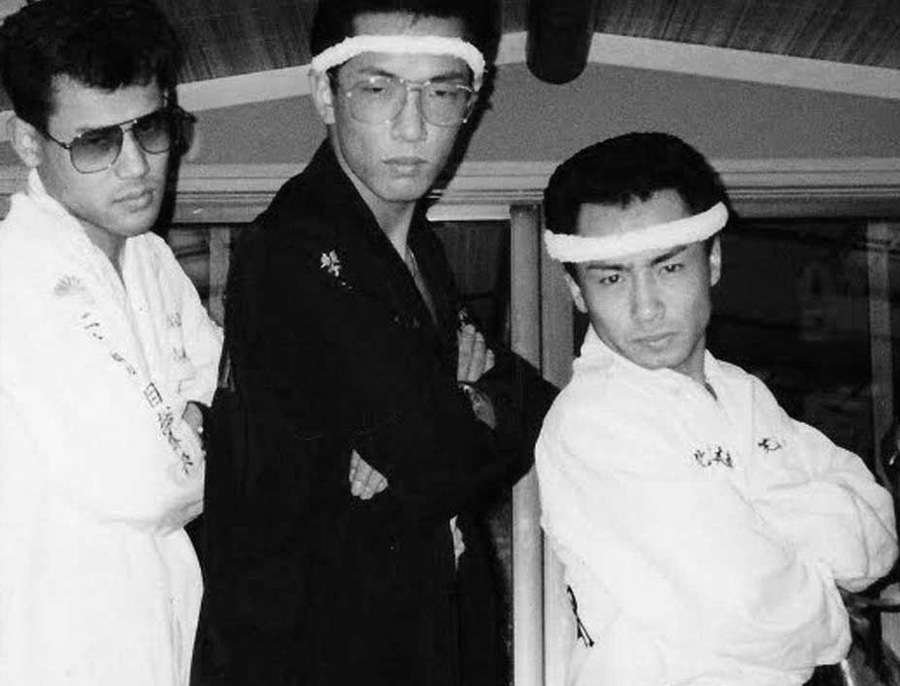 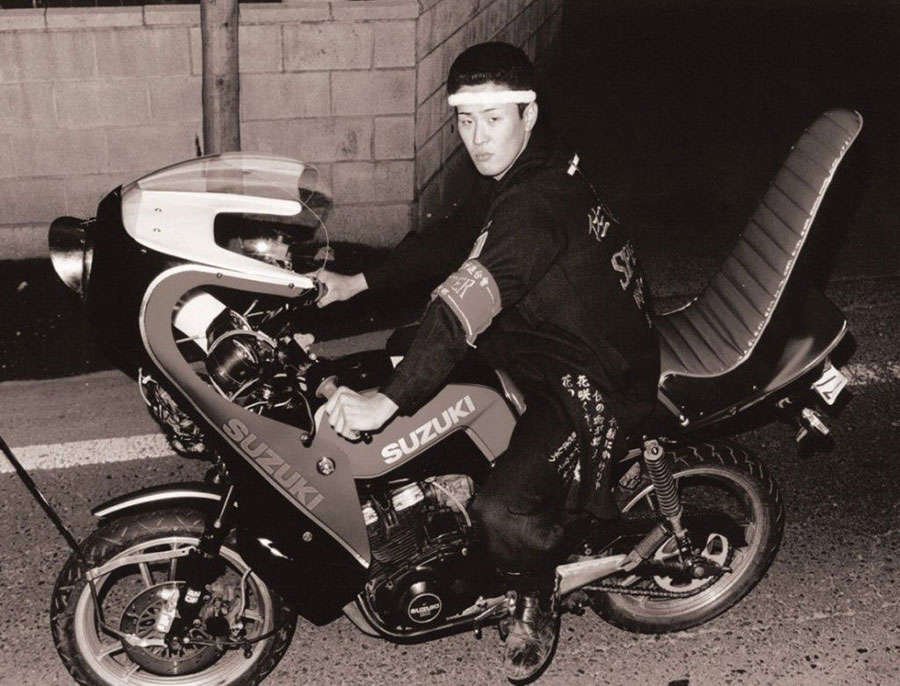 In the 1990s, Japan suffered from severe economic stagnation caused by the asset price bubble’s collapse in late 1991. The Japanese refer to the 90’s as Ushinawareta Jūnen or “The Lost Decade”. Widespread unemployment crushed the middle class’ access to disposable income (ie. money for motorcycle parts) and the bōsōzoku numbers dropped by almost half.
In 2004, the Japanese government passed a revised road traffic law which afforded police greater power to arrest motorcyclists riding recklessly in groups. With increased arrests and prosecutions, bōsōzoku participation rapidly went into further decline.
As of 2010, police reported that the new trend among bōsōzoku was to ride together in much smaller groups and to ride scooters instead of heavily modified motorcycles. In 2013, the National Police Agency re-classified bōsōzoku gangs as "pseudo-yakuza" organizations. And by 2015, there were only a reported 6,771 active bōsōzoku throughout Japan. 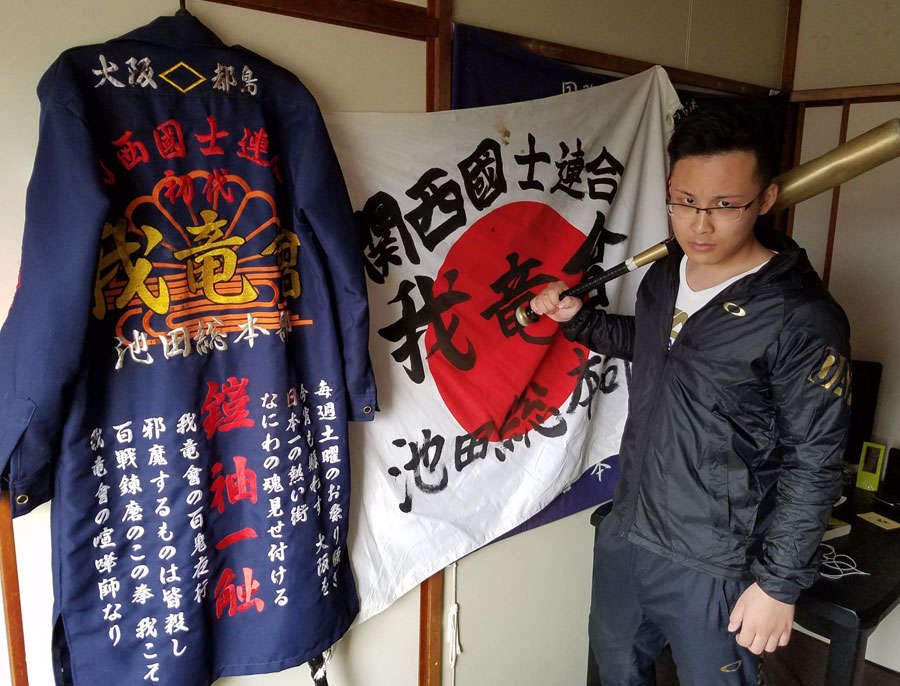 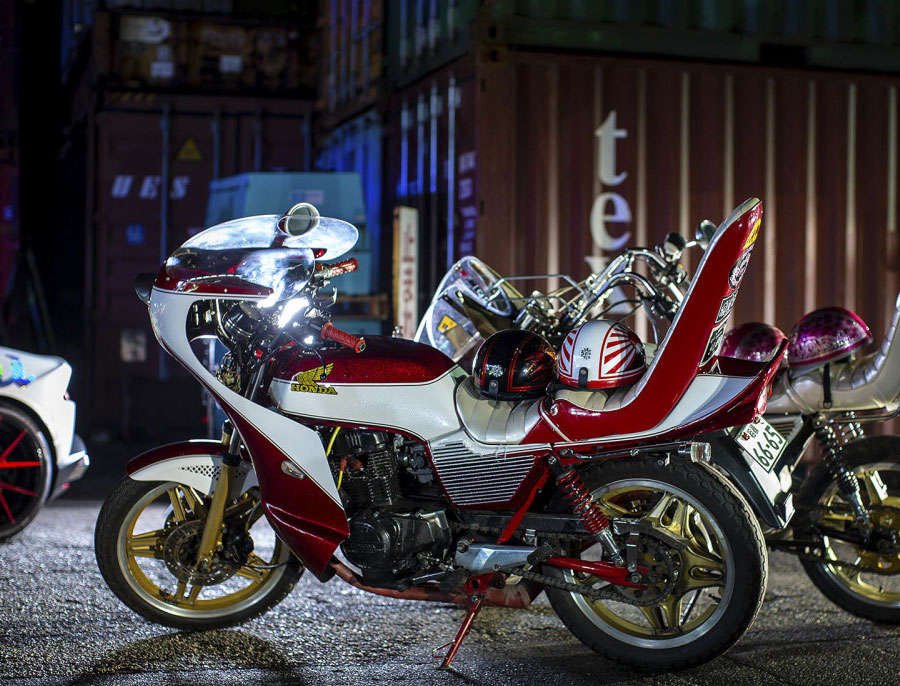 “Japan is a fully developed country,” Kazuhiro Hazuki says. “It won’t allow any flaws in the system. Current society will not let the average low-life succeed at life by doing low-life things.” The result is essentially a lost culture. A way of doing things, a way of being done, that will almost certainly never rise again.
All that’s left are a few scattered hangers-on still haunting the streets of Japan, though tamed and solitary, some random articles like this one in far-off corners of the Internet, and a reasonable amount of appropriation by the luxury fashion industry. Walk down the glitzy streets of Ginza, Tokyo’s fashion district, and you will see mannequins donning revamped versions of the Tokkōfuku overalls, embroidered with high-end fashion labels where gang scrawls used to be.
Written by Jeff Campagna