Meeting up with Lee Dennis and his 68 Ranchero in St. Catharines for some fresh ink.

⚡
It’s not even 9:00 am when I roll into downtown St. Catharines off the 406. If there’s a picturesque route into the city centre, I’m sure as hell not on it. There’s an Adult’s Only, a Smoker’s Paradise, a Quick Plug, low rises, vacant strip plazas, plywood on windows everywhere, and tattered garbage being carried and toyed with by the crisp March morning air.

It’s a Tuesday, so those who have a job to get to are gettin’ to it. And those who don’t, of which there are many in St. Catharines, are already up and at’em, hanging out on street corners, hooded and shivering, relighting stale half-smoked butts and leering intently at my sub-compact SUV as I turn off Roidron St. and onto Queenston. 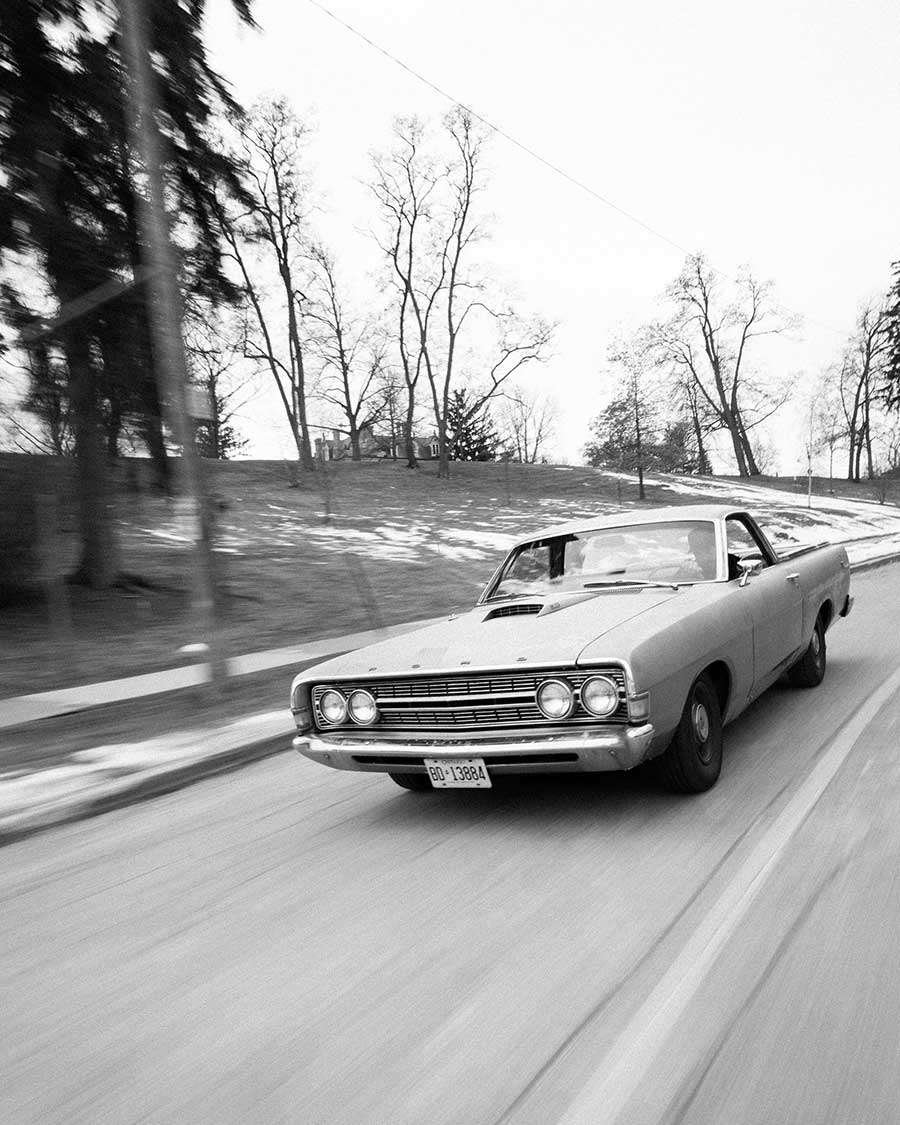 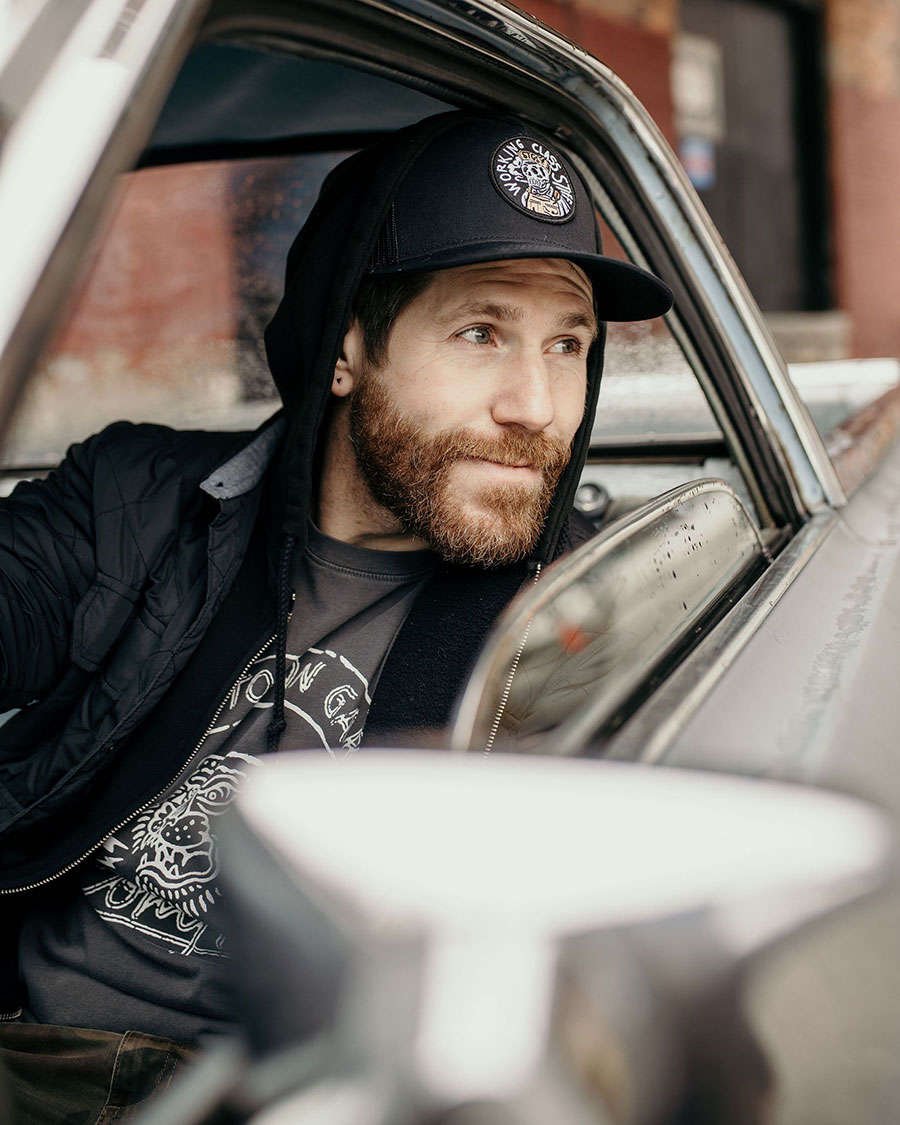 I meet up with Lee Dennis out front of his tattoo shop The Downtown Saint, a nicely redone two story brick building with gold lettering on the front, a trendy temple of art and ink butted up against the fraying edges of downtown.

But if Lee and his shop are the hip, fresh future of St. Catharines, and his surroundings are the old, weathered past, the 1968 Ford Ranchero he pulls up in is caught somewhere in between. An eight cylinder fulcrum upon which two extremes teeter and totter. 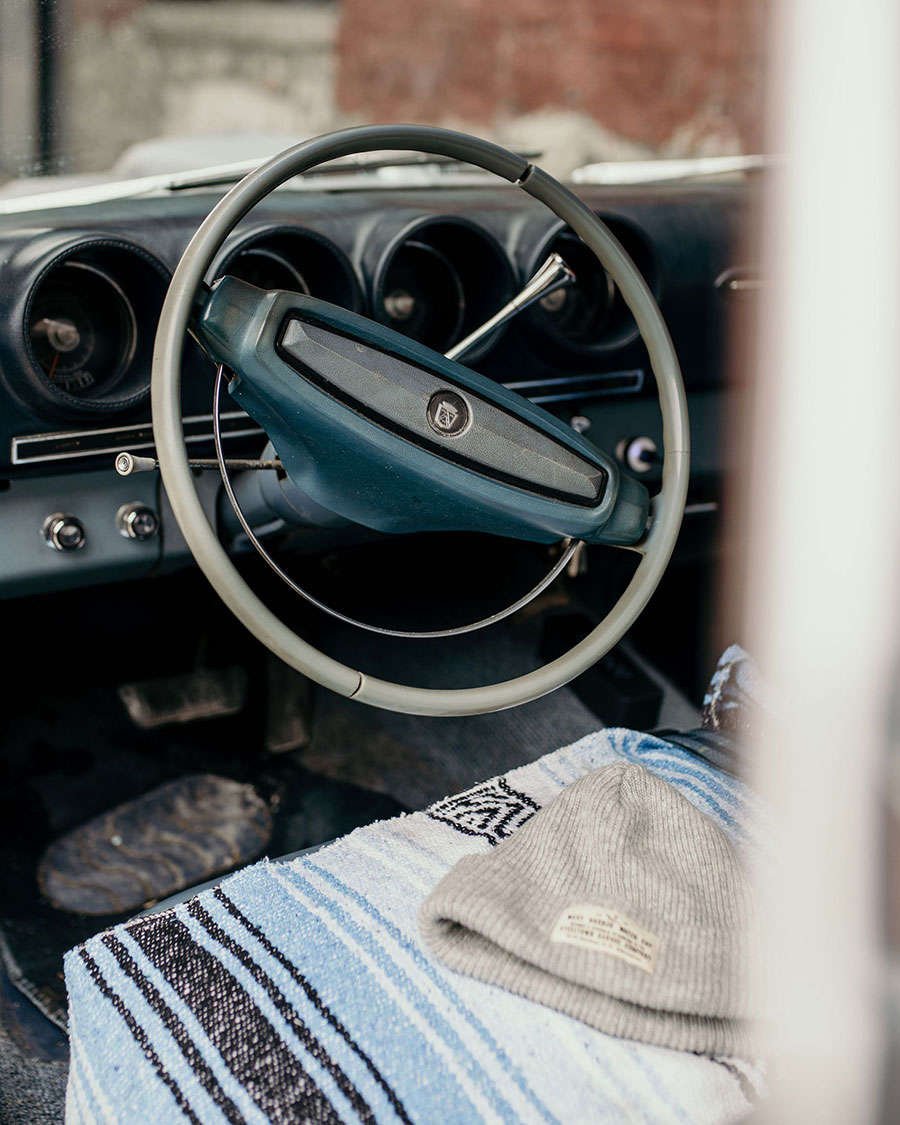 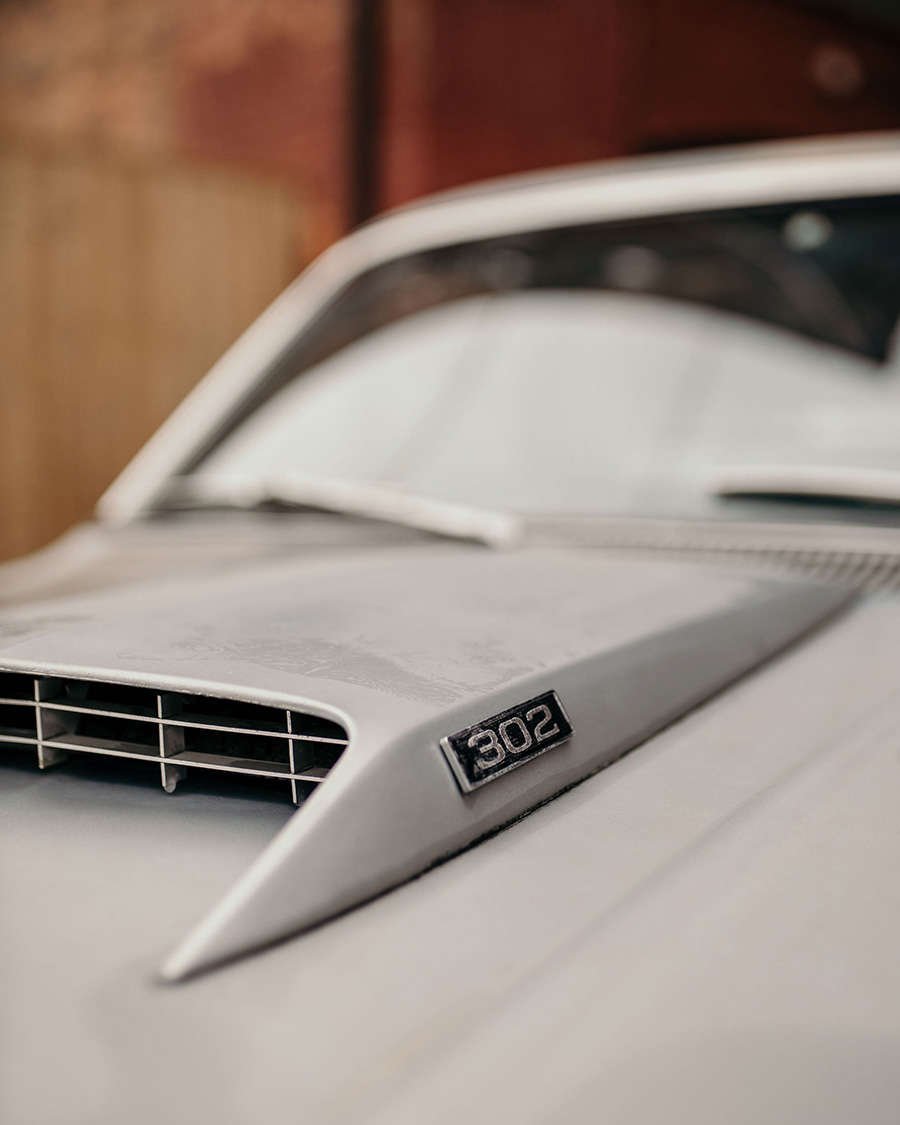 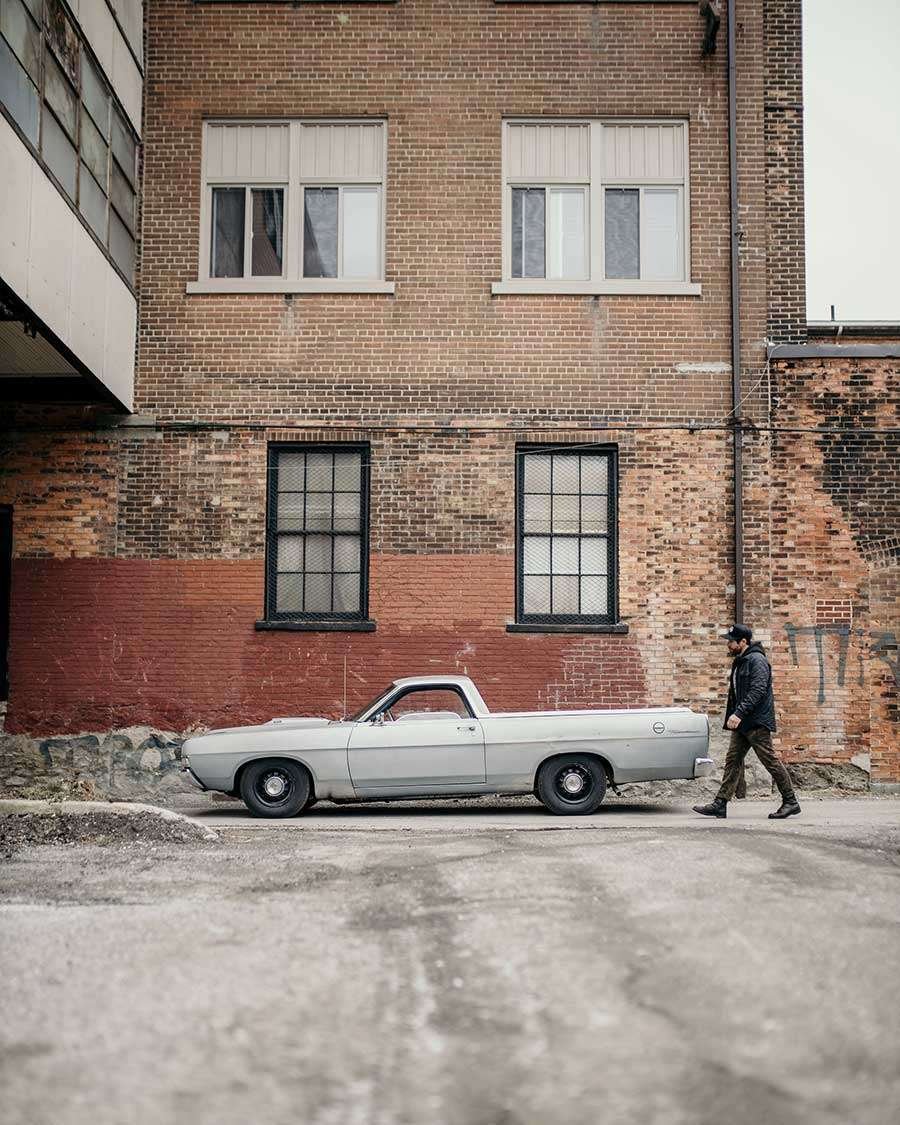 I follow Lee to an alleyway behind a pawn shop on St. Paul Street. It’s his go-to spot when he wants to snap some rad pics of the Ranchero for the gram. And I can immediately see why. The scene is a charming hodgepodge of urban decay. Old, tumbled red brick, some parts haphazardly painted over. Shitty asphalt. Graffiti. Video surveillance. And what could only be loosely described as a skyway, clad in a tapestry of wood, riveted sheet metal and corrugated, all the with the baby blue paint peeling off.

Lee parks the Ranchero under this skyway. 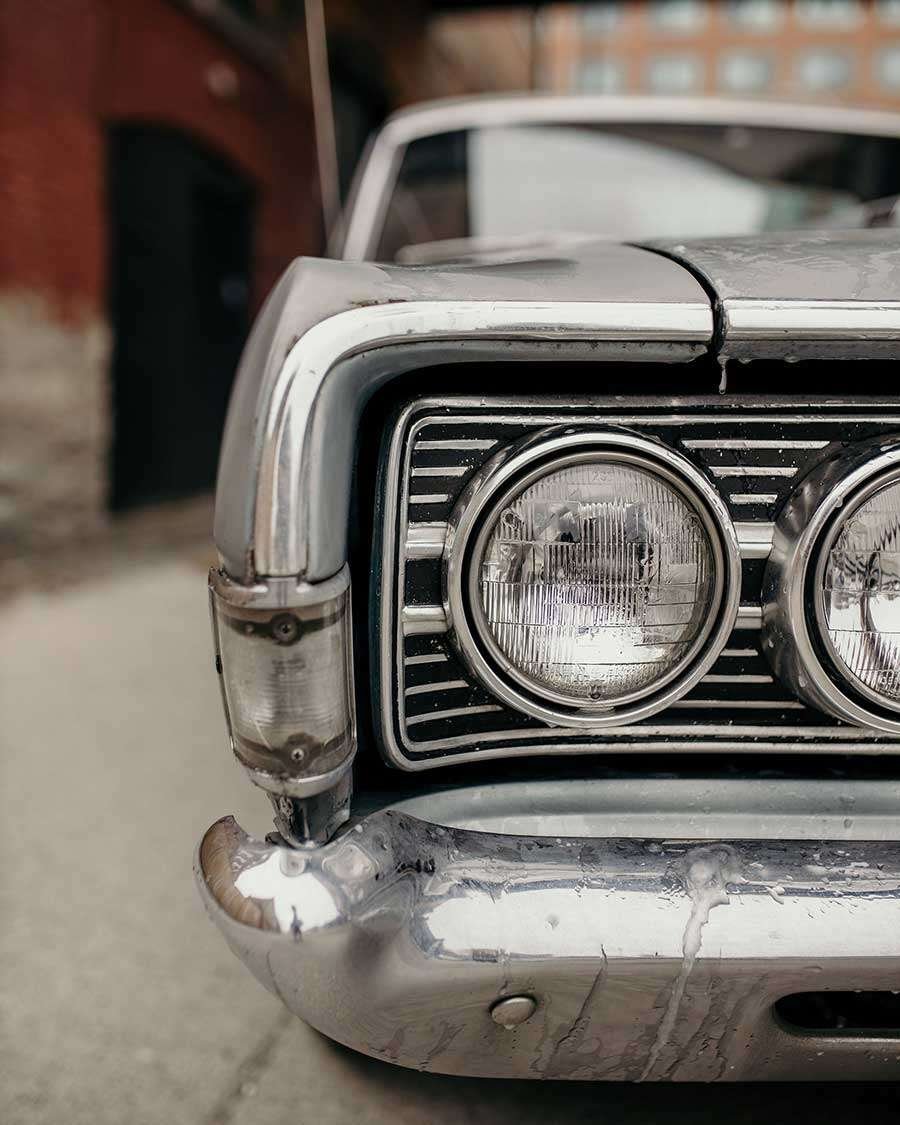 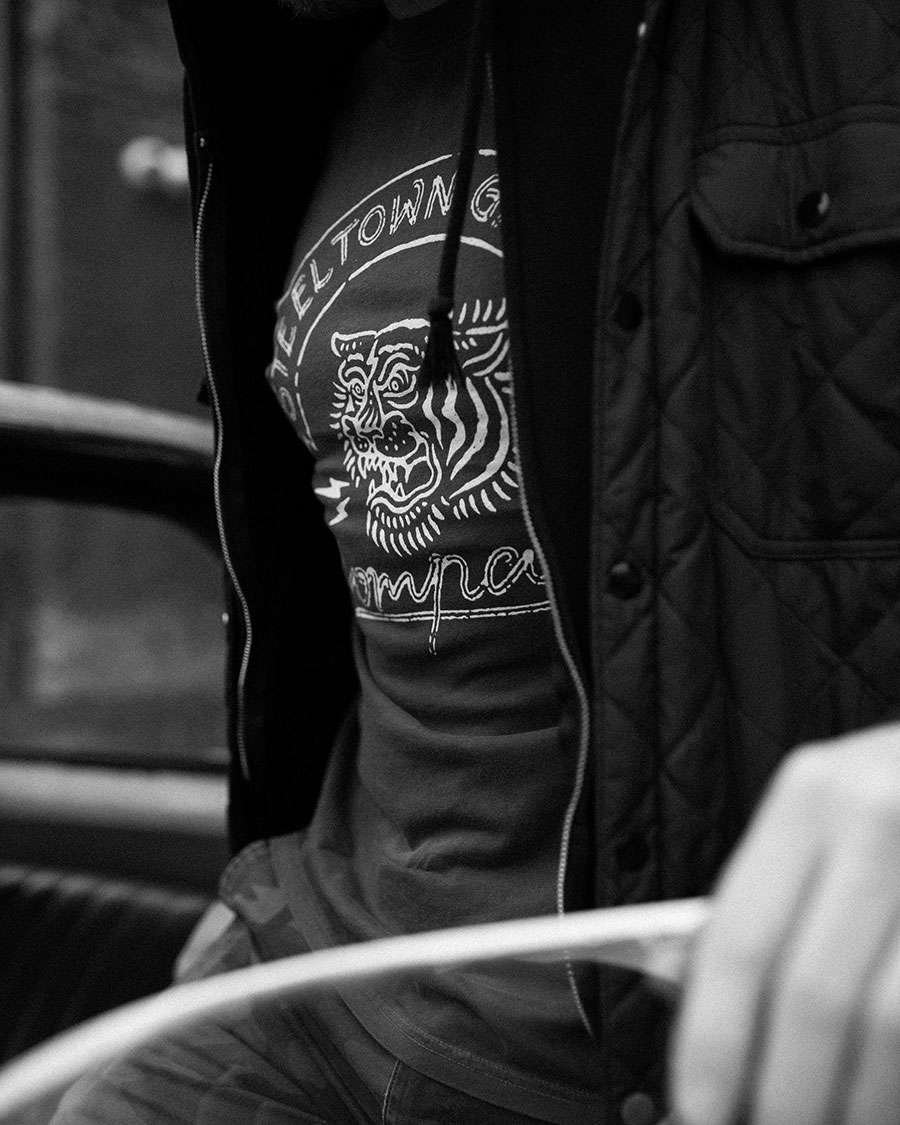 “I was looking for something cool to haul bikes in,” Lee says, as Kyle Poole snaps pics of the Ranchero. “I put a new battery in, new wires, new plugs and that’s it,” he adds proudly. It’s been his all season daily driver ever since. With Ford’s famously bulletproof windsor 302ci V8 under the hood, the reliability doesn’t come as a surprise.

We chat about the utility coupe’s patina that “money can’t buy”, the unknown history of the paint job (inside the door jams is an electric blue, but it’s either faded as all hell or been painted over with an unreasonable facsimile on the outside), and the metal Ranchero badges that needed some superglue to be straightened out. All the while, Blind Lemon Jefferson’s Matchbox Blues plays, tinny and distant, from the smartphone in Lee’s pocket.
Music from the 20s. A car from the 60s. A dude born in the 80s. All mashed together in a city that was one of the final Canadian stops on the Underground Railroad for refugee African-American slaves during the 1850s. It’s a mind-bending time casserole brought to you by Spotify, Apple, Kijiji and Instagram. 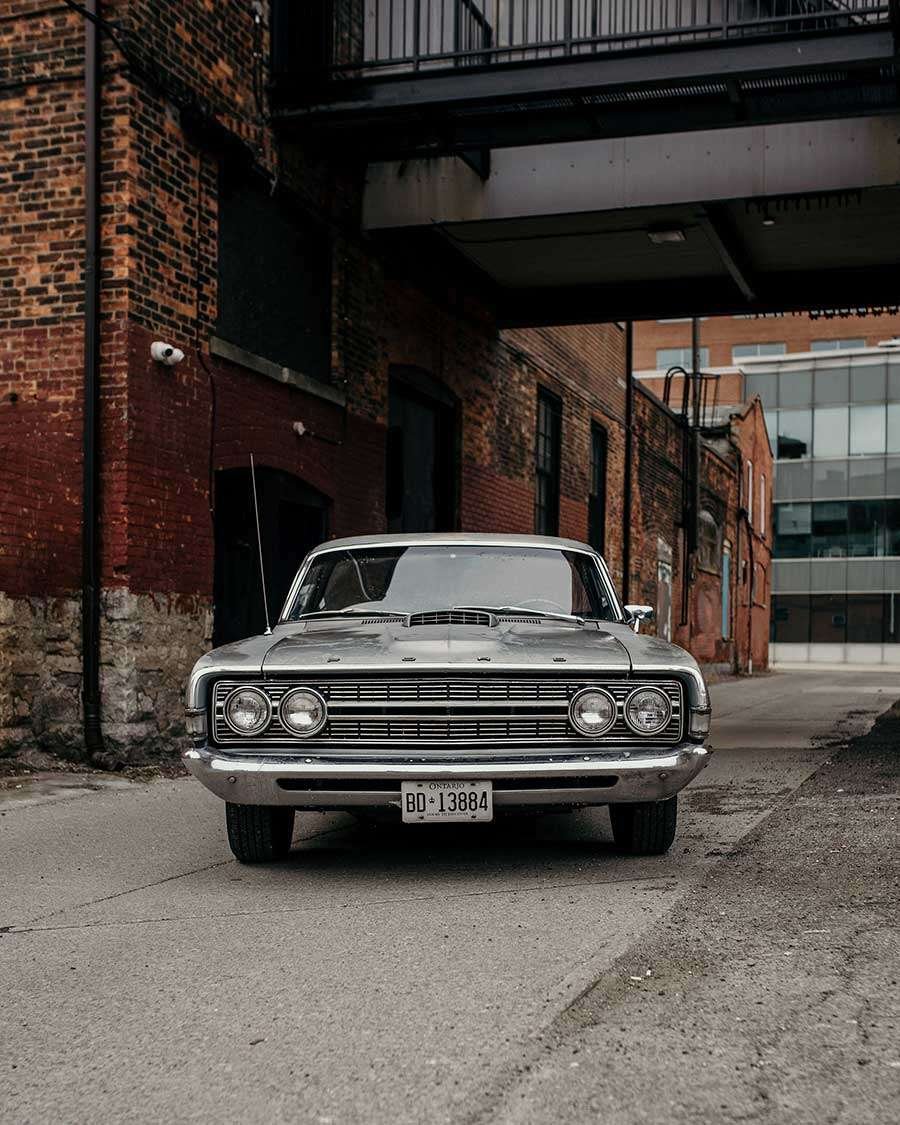 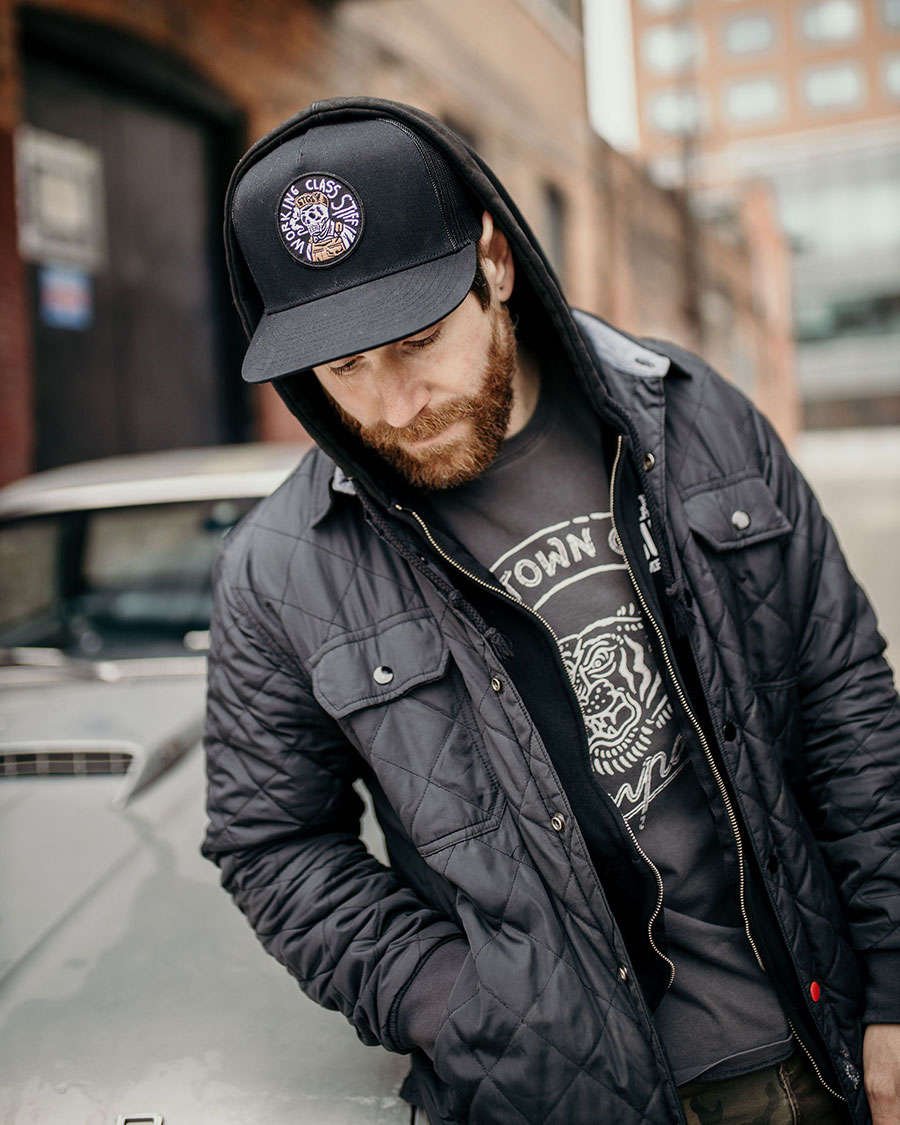 Lee is a pretty quiet dude. If you found yourself in a conversation with him, he probably wouldn’t even bother mentioning that he owns one of the coolest tattoo shops in Southern Ontario, you’d just assume he works there. He probably wouldn’t mention that he’s a pro BMX rider either, or that he’s quite adept at customizing old motorcycles, or that he owns a rad little Airbnb in town and did all the renovations himself.
“I’ve always been an artist,” Lee explains, when asked how tattoos, BMX and motorcycles all somehow tie into each other. “With BMX, you’re always looking at new setups like rails, banks, stairs, and roofs in different ways and trying to picture how a trick would look in a photo, which is also kind of artistic. BMX naturally led to motorcycles.” So how does the Ranchero fit in? “Old cars are just cool,” he says laughing. “I’m not someone who could just drive a regular car.”

After a few more must-see photo ops (a high speed cruise over the Burgoyne Bridge, some under-the-hood shots in front of the burnt out pink building where they train firefighters, and a brief chat on the banks of the oddly turquoise Twelve Mile Creek) we’re back at The Downtown Saint to watch Lee in his element (rather, one of his elements). 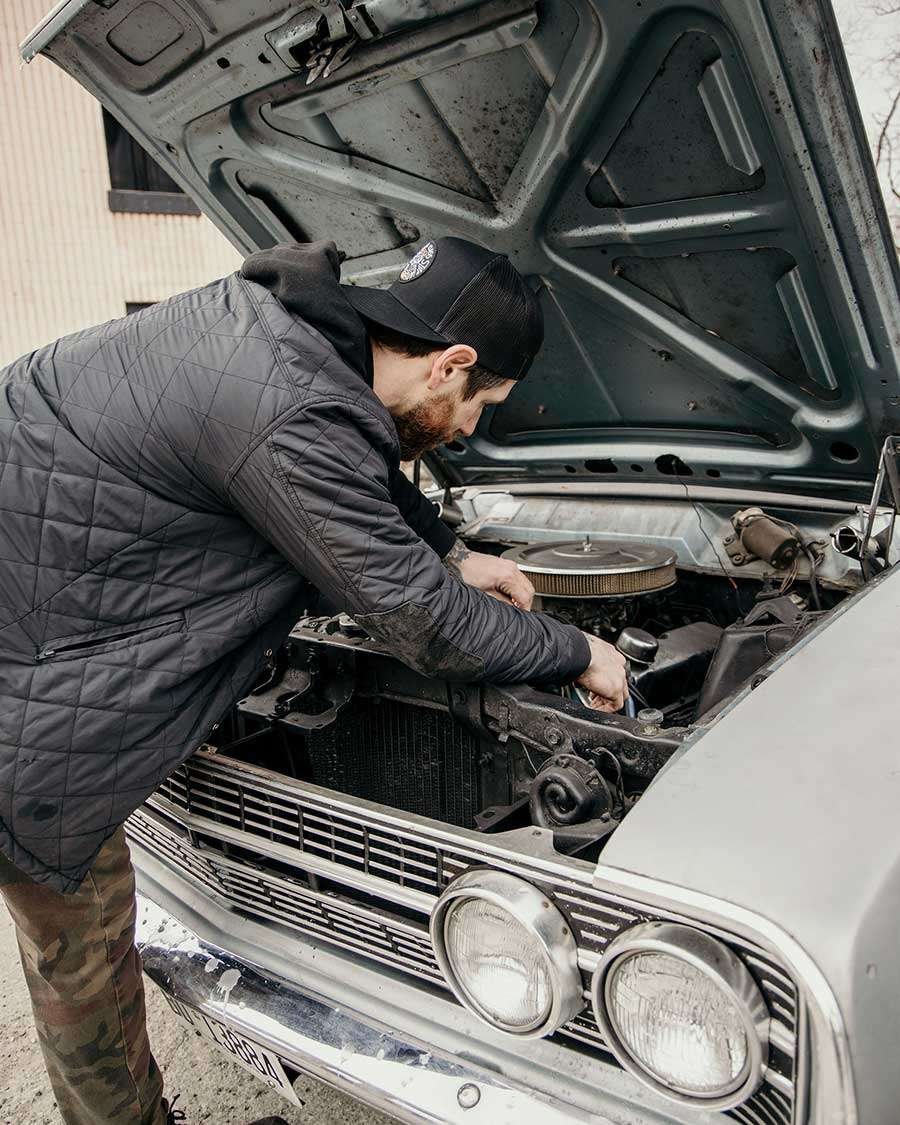 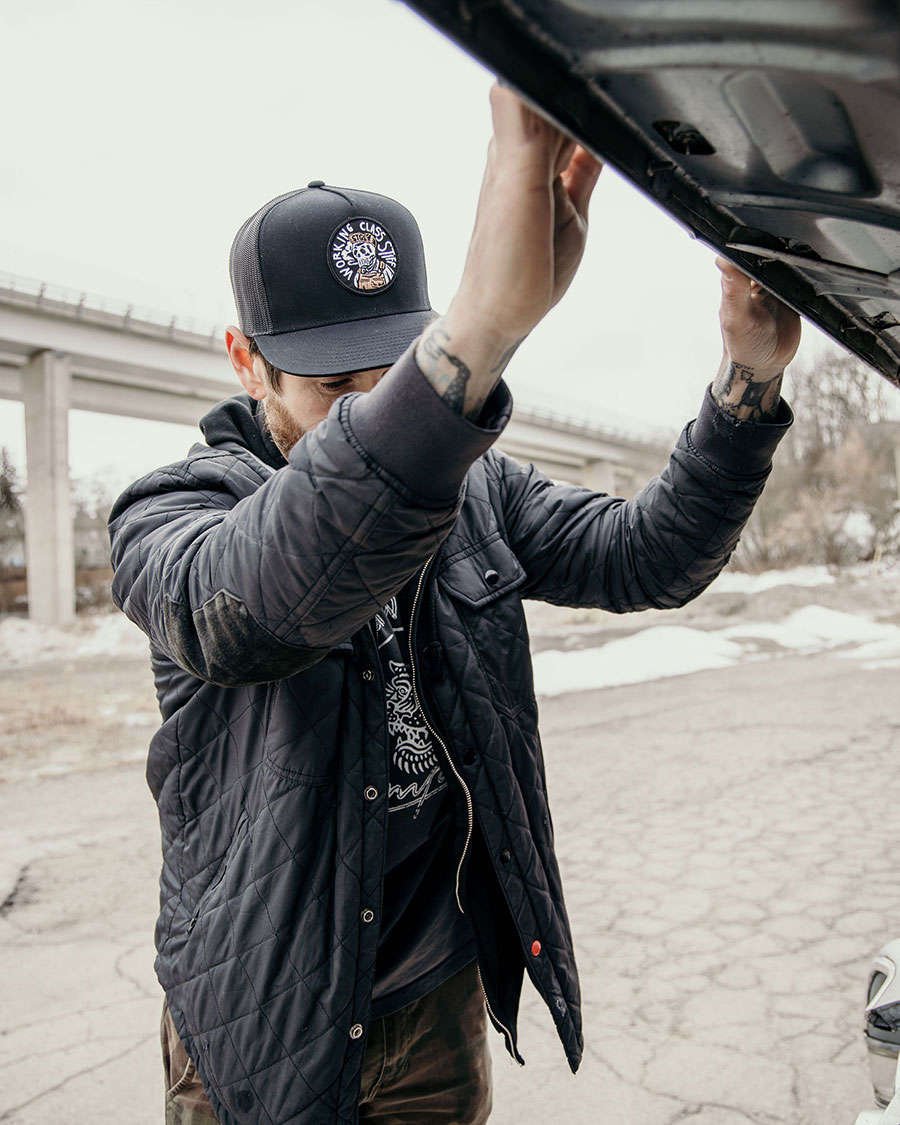 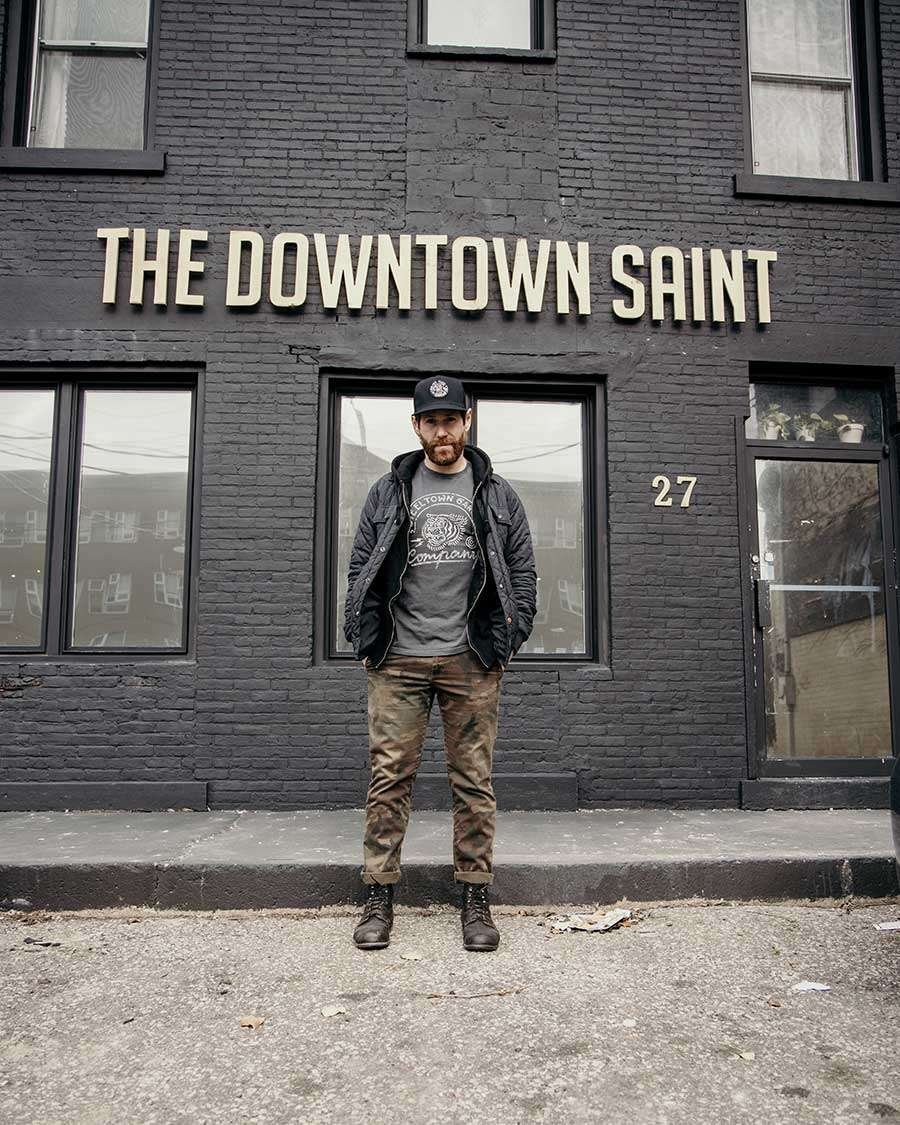 But The Downtown Saint wasn’t Lee’s first crack at small business ownership. Back in 2008, he opened the only BMX shop in St. Catharines. He was only 24. “I ran it for a few years,” he says, “but my BMX career was progressing so rather than hire staff I just closed it to ride professionally.”
Four years later, Lee got a job tattooing at a shop called Downtown Saints. But after one of the two owners did the “midnight dash” leaving the other owner, Mitch, hanging, the shop’s future was cast in doubt.

“Mitch soon after asked if I wanted to partner up and keep the shop going,” Lee goes on to explain. “I said of course. And we changed the name to The Downtown Saint (TDS).”

The rest, as they say, is history. 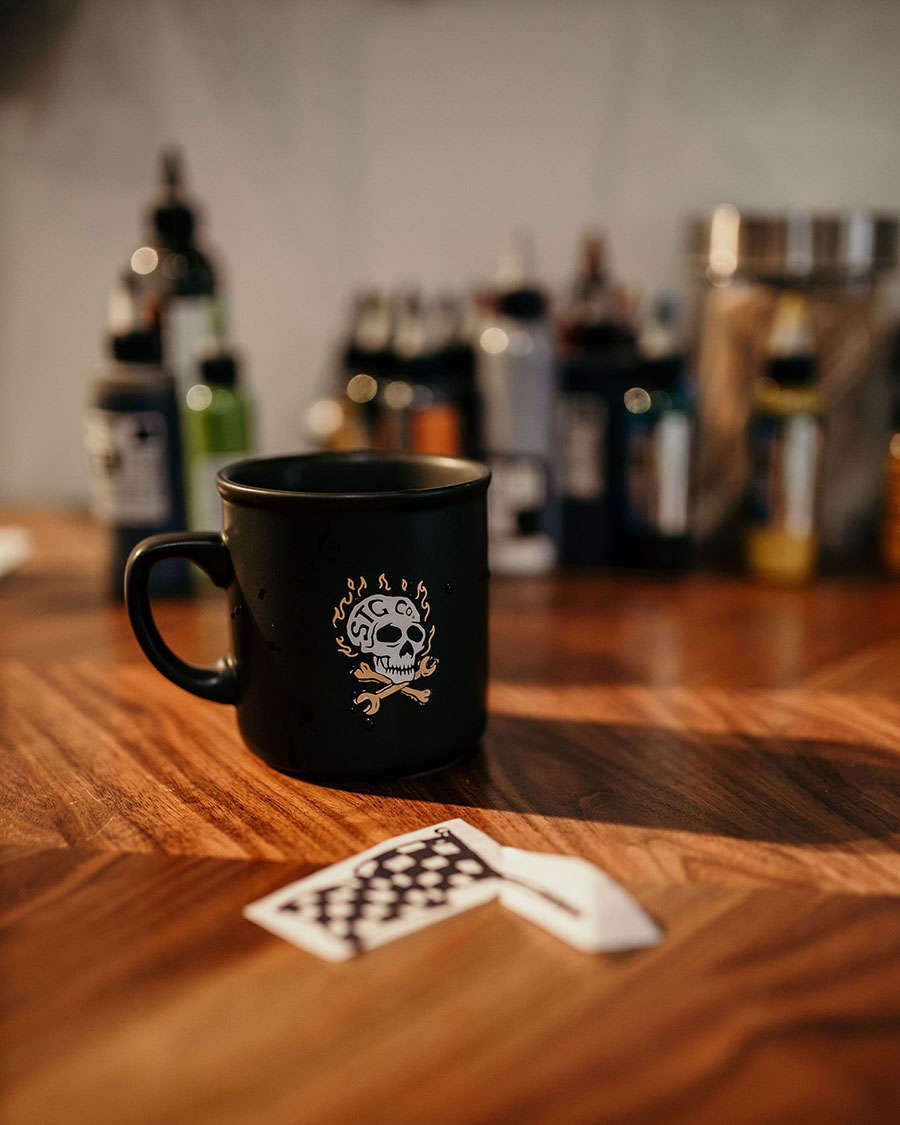 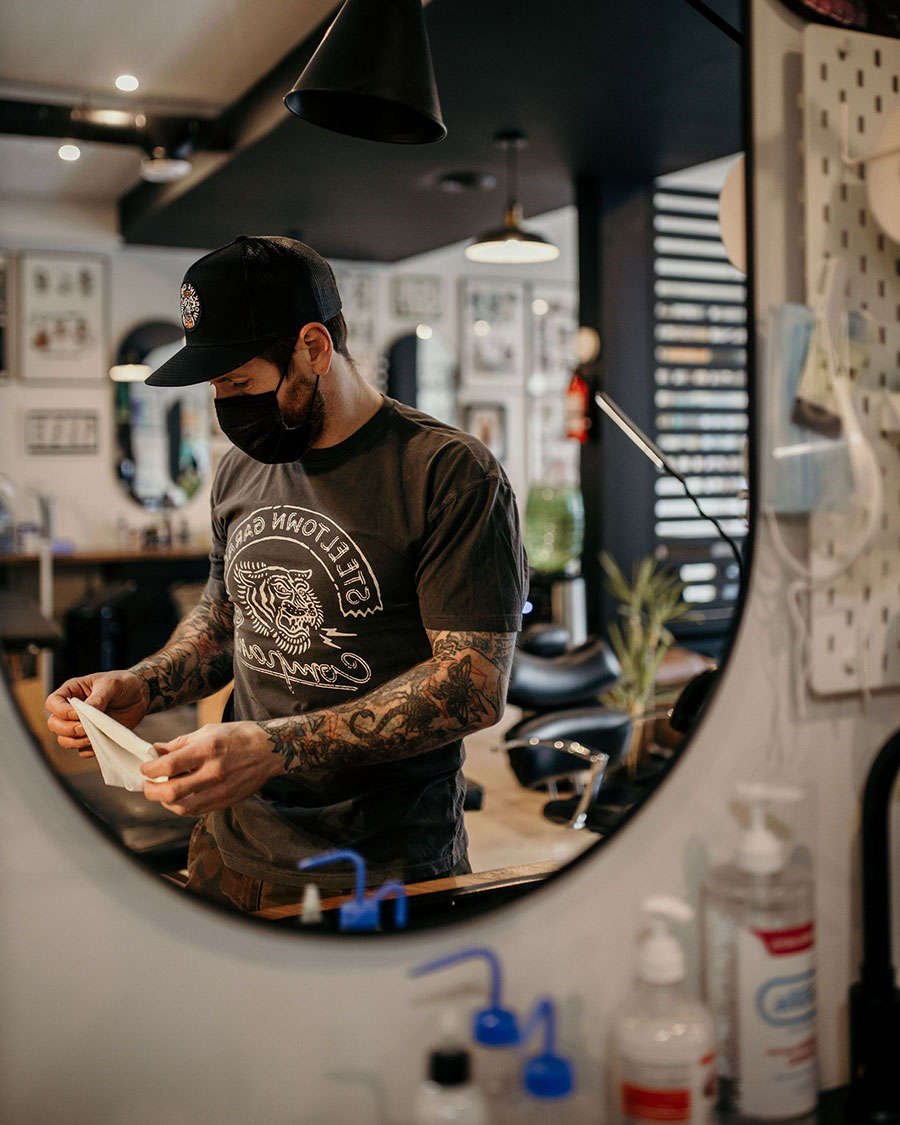 After a long period of being closed because of the pandemic, The Downtown Saint was allowed to reopen just the day before our visit. The energy in the shop is palpable. The artists are happy to be back at work. “It feels good to have a sense of purpose again,” Lee says, half joking, as he prepares his station with paper towels, inks, a light.
With the blue stencil ink of an old school checkered flag on my right arm, I have a few minutes to creep around the shop and check shit out. There’s some truly great artwork framed all over the walls, mainly tattoo pieces, many of which are out there somewhere, on living display 2mm beneath someone’s skin, other pieces however, have yet to find their forever home.

Old Steeltown patches, stickers and postcards are jabbed into the corners of frames. My favourite piece of decor is what appears to be a thrifted sepia portrait of Jesus with a white ¾ motorcycle helmet blasphemously painted on top of it. 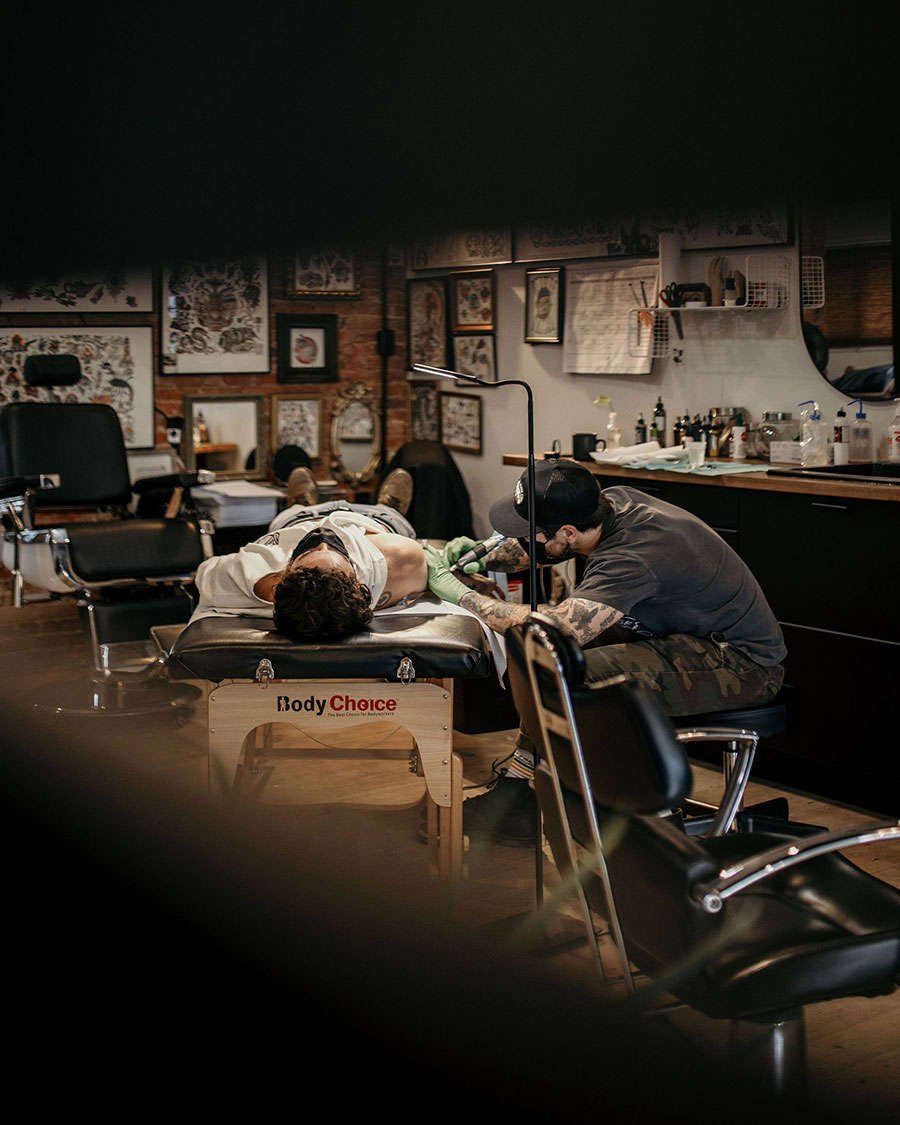 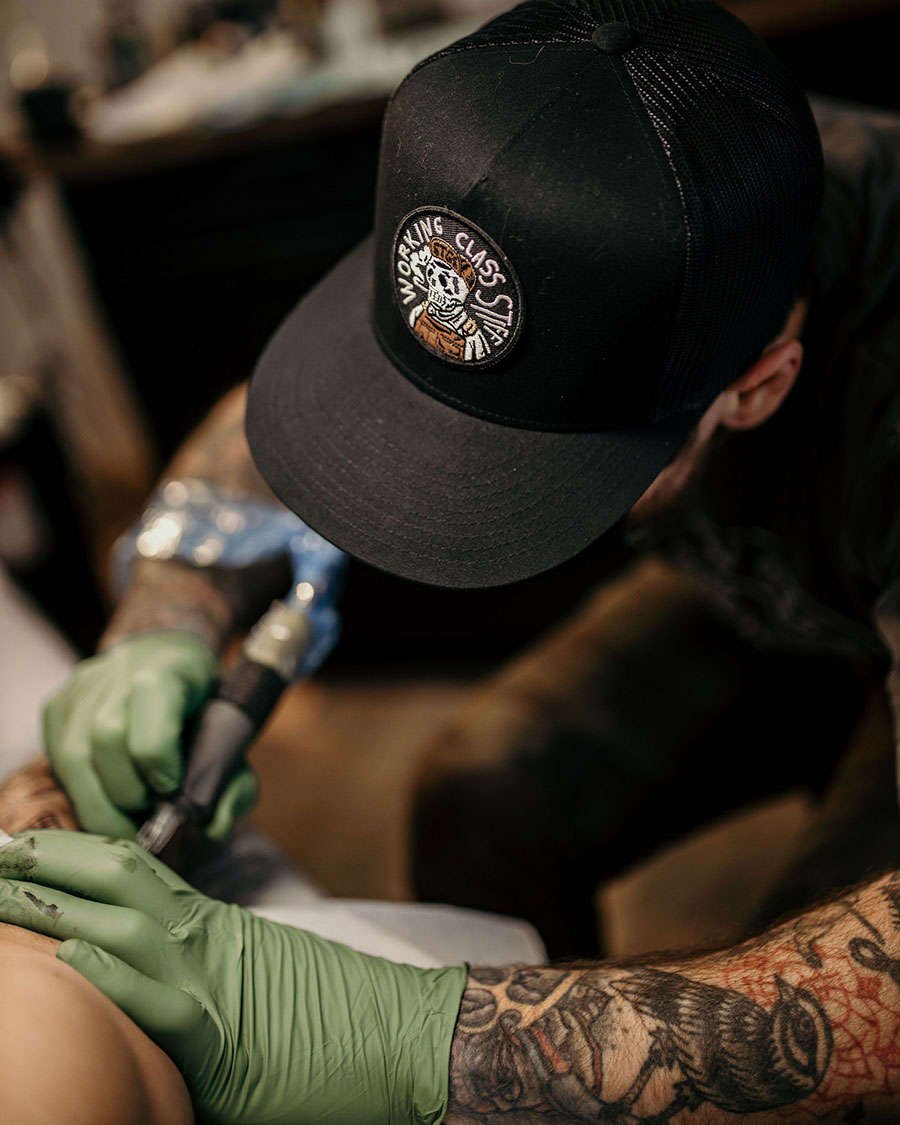 With Electric Relaxation by A Tribe Called Quest playing, appropriately, over a loudspeaker in the shop, I lay down on the black vinyl bed for my massage of a thousand needles. In some oddly masochistic way, I’ve always enjoyed the feeling of getting inked. It’s somehow therapeutic. So, as a fellow business owner who’s constantly on the hustle, I take the opportunity to relax with the sounds of old school hip hop and the constant mosquito-like buzz of Lee’s tattoo gun.
Lee works fast. Faster than most artists actually. But he’s been at it a long time, having made himself a janky little DIY kit when he was 13 and then graduating to a more professional setup when he was 18. Now 34, Lee is at the top of his game. But like his career in BMX, he speaks about his tattooing modestly, as if he’s still just sorta starting out.

He wipes the fresh blood off the top of the checkered flag when it’s complete. “A one paper towel tattoo,” Lee announces proudly to the other artists in the shop.

And I make an entrepreneurial joke about “keeping costs down”. 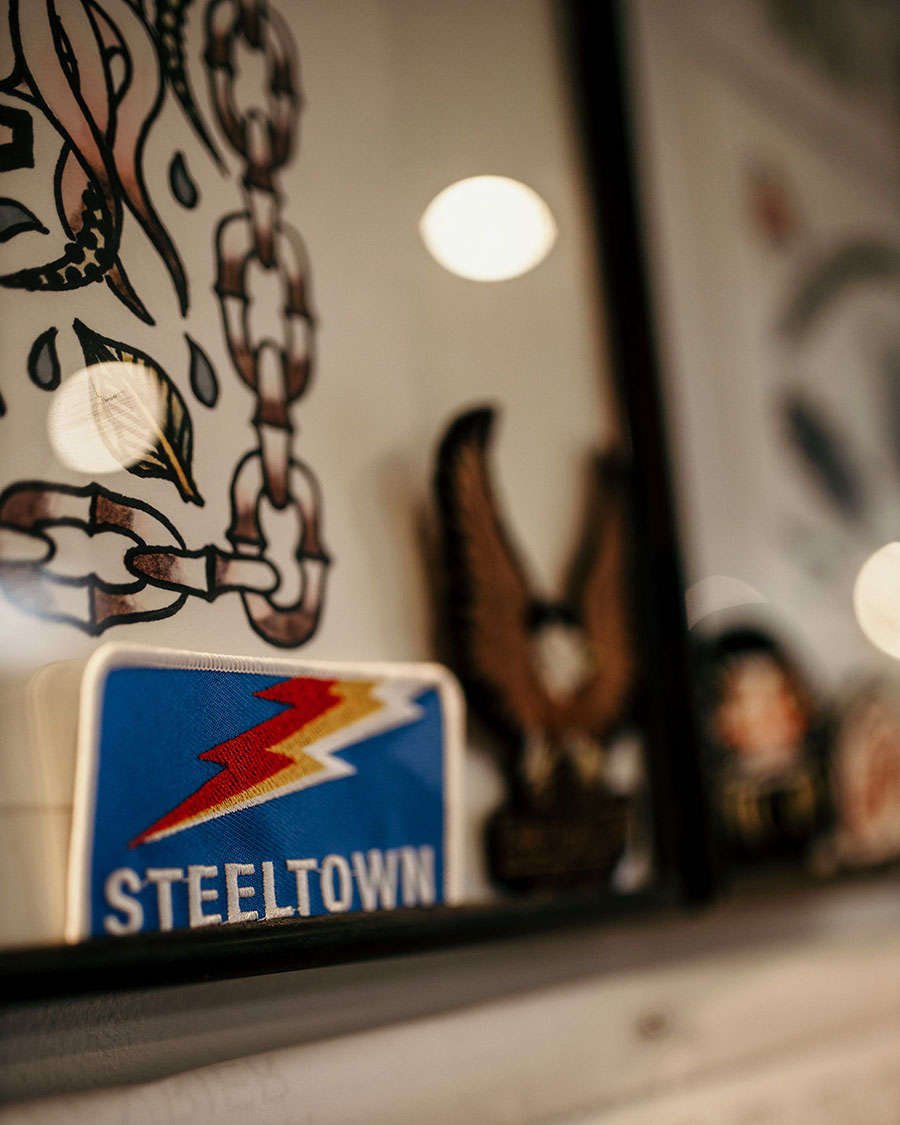 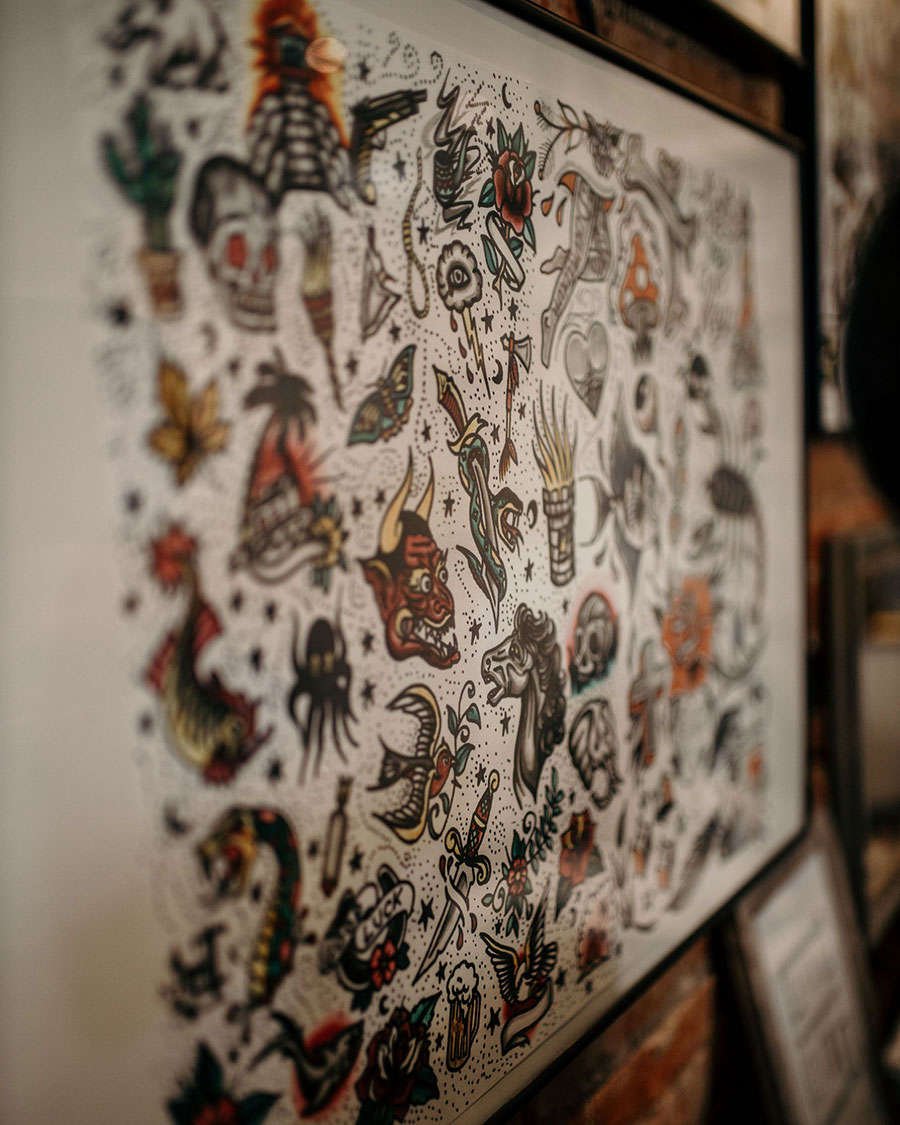 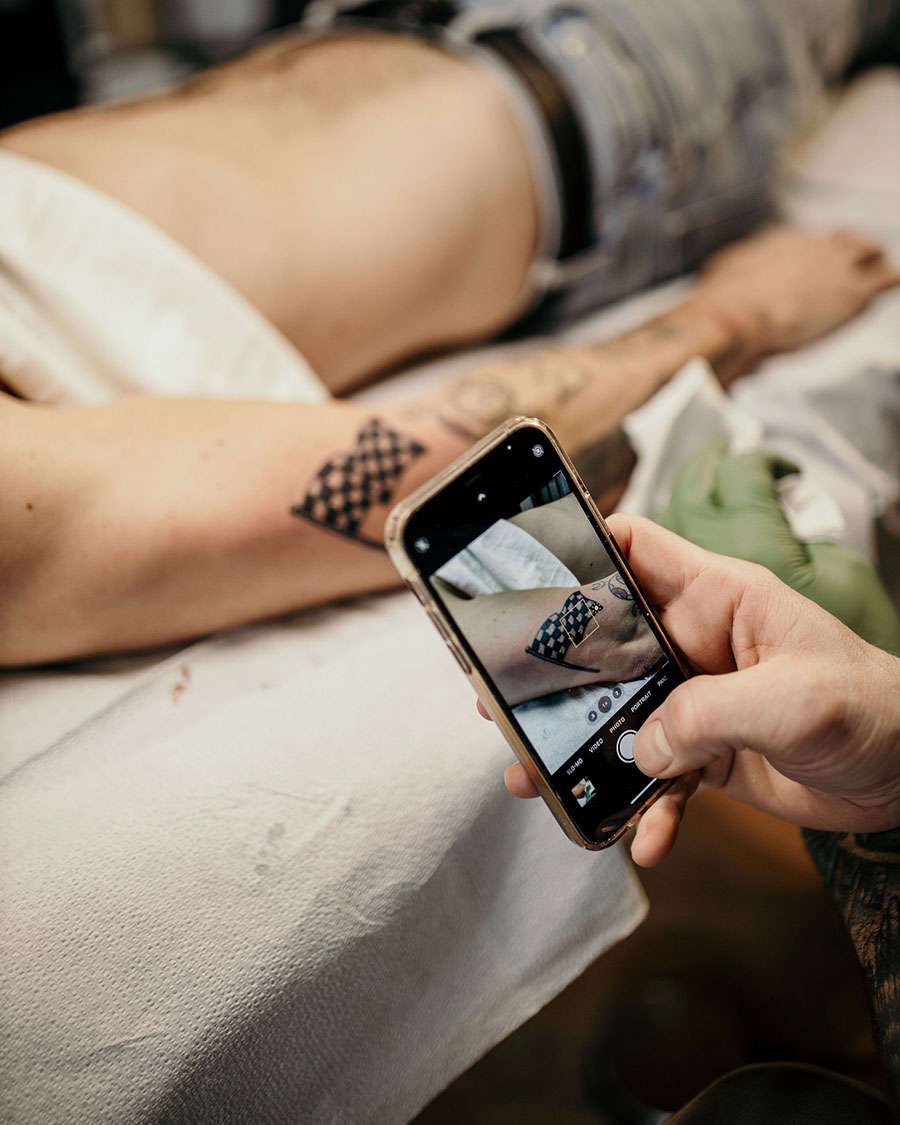 Now that pandemic restrictions are beginning to lift, the books at The Downtown Saint are filling back up. Fast. Lee’s phone doesn’t stop buzzing. And his apprehension about the impending rush of eager customers with bare patches of skin to fill, as well as the arduous task of working through the backlog of a year’s worth of canceled appointments, is noticeable, albeit barely there.

But when one has as many rad passions as Lee, especially ones best enjoyed in warmer weather, the threat of a 60 hour workweek can be a buzzkill.

Even to a saint. 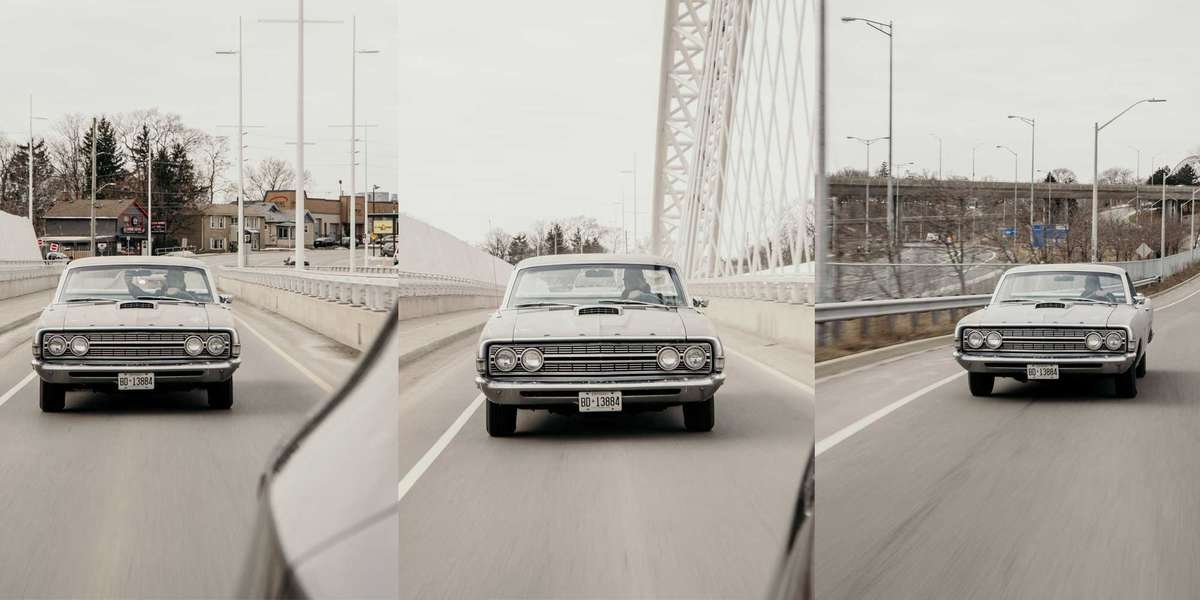 But if Lee Dennis is a saint of anything, it’s stoke. You know, that life force into which all of us wild ones try to tap. That thrilling tension between passion and pain. The rush of barreling down a snowy mountain on a pair of waxed toothpicks. The feeling of squatting on a piece of fibreglass inside of a massive saltwater barrel. Finally hitting 100mph on that shitty old motorcycle. An emptied out pool. A burnout. Airtime. A donut in the snow. A wheelie. A six foot rail grind. You know… stoke.

Lee is the patron saint of stoke. He’s one of those characters that you could drop down into any stoke-capital of the world and he would seem totally, utterly at home. Santa Monica, Portland, Cape Town, Whistler, Ventura, North Shore. You name it.

Lee is that quiet, chilled-out, smiley dude who you won’t even really notice until he’s thrashing up a vertical wall on his BMX, bunny-hopping a moped in the middle of winter just for kicks, or jabbing your arm with a needle 3,000 times a minute⚡