Deep in the heart of western Japan, a denim revival was born and bred. We trace the history of selvedge denim and visit a hundred year old knitting mill.
If you take the Shinkansen bullet train for five hours southwest from Tokyo you’ll arrive at Fukuyama, a modest, working-class town on the banks of the Ashida River. If you then double-back east on a local train for 25 minutes to Kasaoka, you’ll have gotten yourself pretty damn close to the heart of Japanese denim production. Still, you have to take a taxi for another half hour north to get to Ibara, a small city of about 40,000 people and home to the revered Nihon Menpu Textile Co. Ltd.
It’s here, at a random intersection beside a farmer’s field in Okayama Prefecture, that Nihon Menpu has been spinning up some of the world’s best denim for over a hundred years. 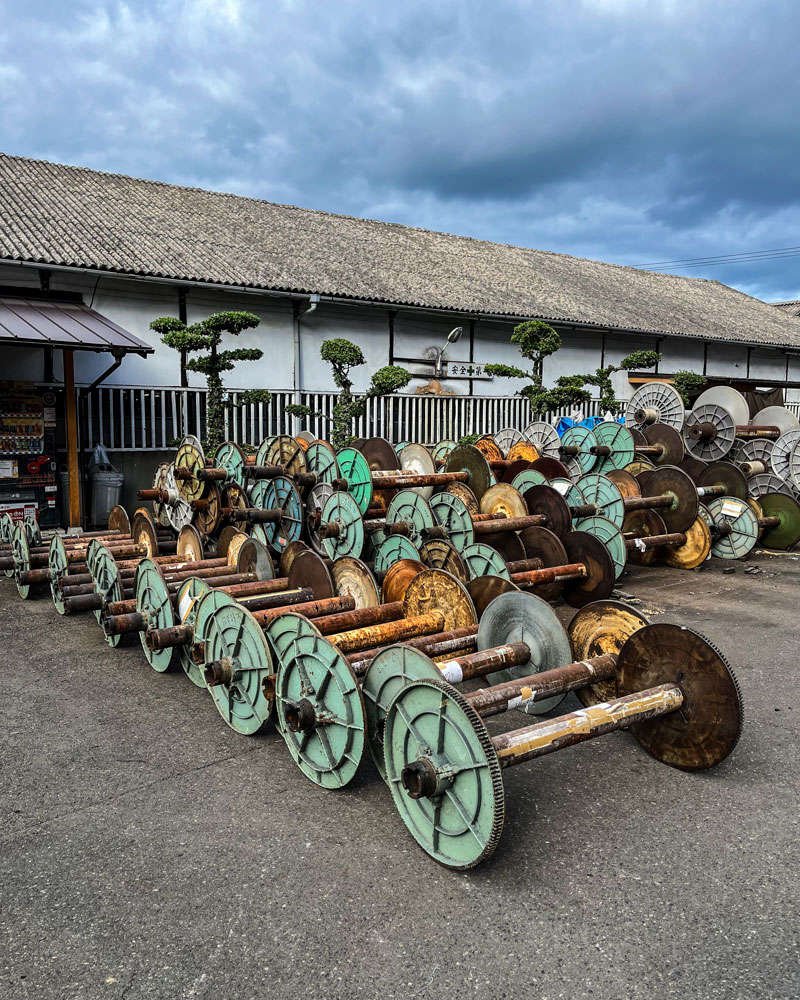 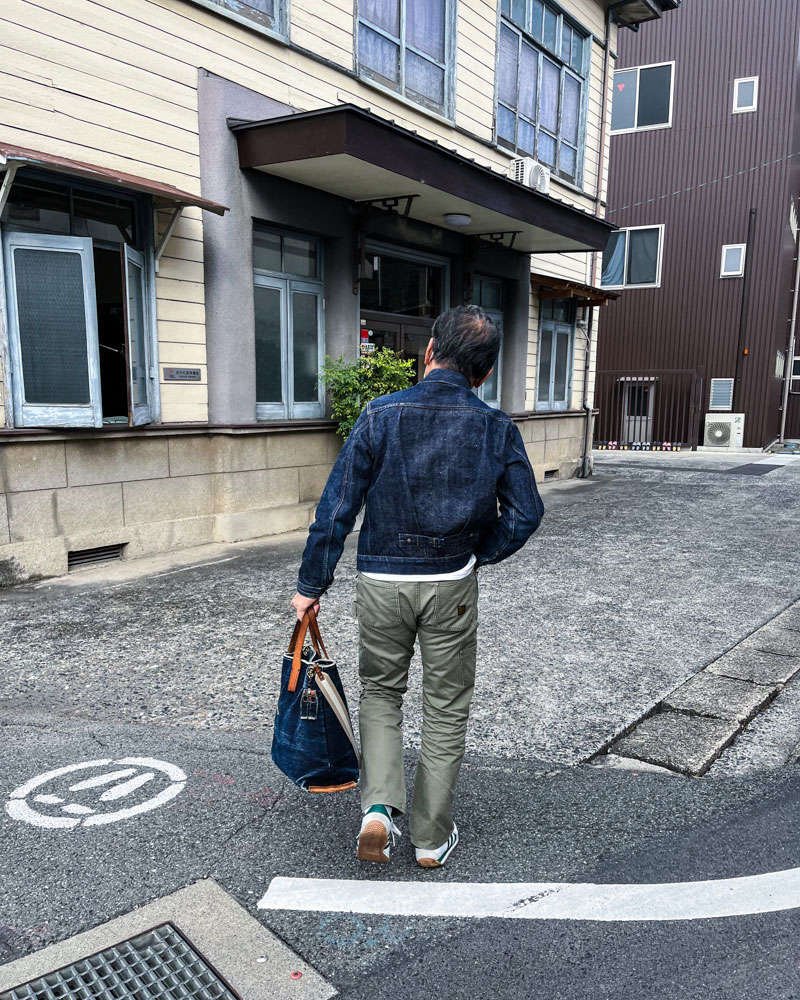 After trading my Steeltown Field Boots for a pair of slippers four sizes too small, I’m offered a cup of hot coffee in the cluttered office space of Nihon Menpu’s main building. Together with Shinji Kawai (President of Nihon Menpu), Ryotan (Shinji’s son-in-law and Chief of General Affairs), Chieme (the most endearing Chief of Sales I’ve ever met), and Terry-san (President of the Idea Blue Ltd) we enthusiastically rifle through piles of amazing old jeans, vintage chore coats, kimono fabrics and heavy sashiko jackets like curious school children.

As some of you know, we've kinda got a thing for fabric. It's how we start the design process for every garment we make. We call it Fabric First. It's buzz-wordy, we know, but it's got a ring to it. So when it came time to hunt down some of the finest denim, selvedge cloth, and workwear fabric we could find, our search led us here. To central Japan.

Founded in 1917 by Shinji’s father, Jiroichi Kawai, Nihon Menpu specializes in Japanese selvedge denim. It’s an expensive, impractical, highly-manual manufacturing process that is not for the faint of heart. It’s without a doubt, a labour of love. 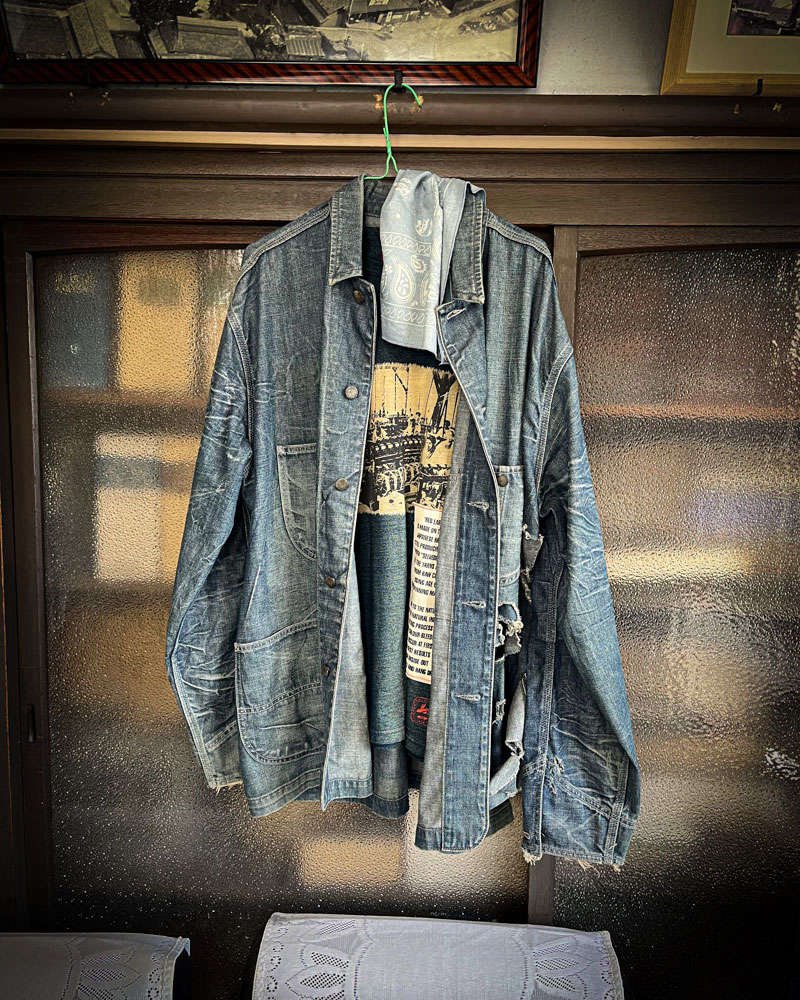 Japan’s love affair with jeans stems from their love affair with mid-century Americana in general (think electric guitars, Roy Orbison, hot rods, Harley Davidson etc). After seeing the rebellious Ronin-esque characters played by the likes of Marlon Brando and James Dean in American cinema, a rugged pair of well-worn jeans became the embodiment of cultural freedom to the post-war Japanese.

To add inventory to the cultural phenomena, American soldiers who left Japan after World War II often left some of their belongings behind, among them jeans. Many of these artifacts would end up being sold in street markets, and so jeans became a common second-hand purchase.
But between the 1960s and the 1980s, international denim production started to take a turn for the worse. Big brands started to mass-produce denim on projectile looms that could make fabric in rolls 60 inches wide (double that of the 30 inch cloth coming off an old-school shuttle loom). Projectile looms were cheaper, faster and easier to fix. But these modern looms created fabric that didn’t seem as interesting, or as durable, or well-dyed as the denim that had come off the old shuttle looms decades before.
So Japan decided to turn back the clock on the world of denim. 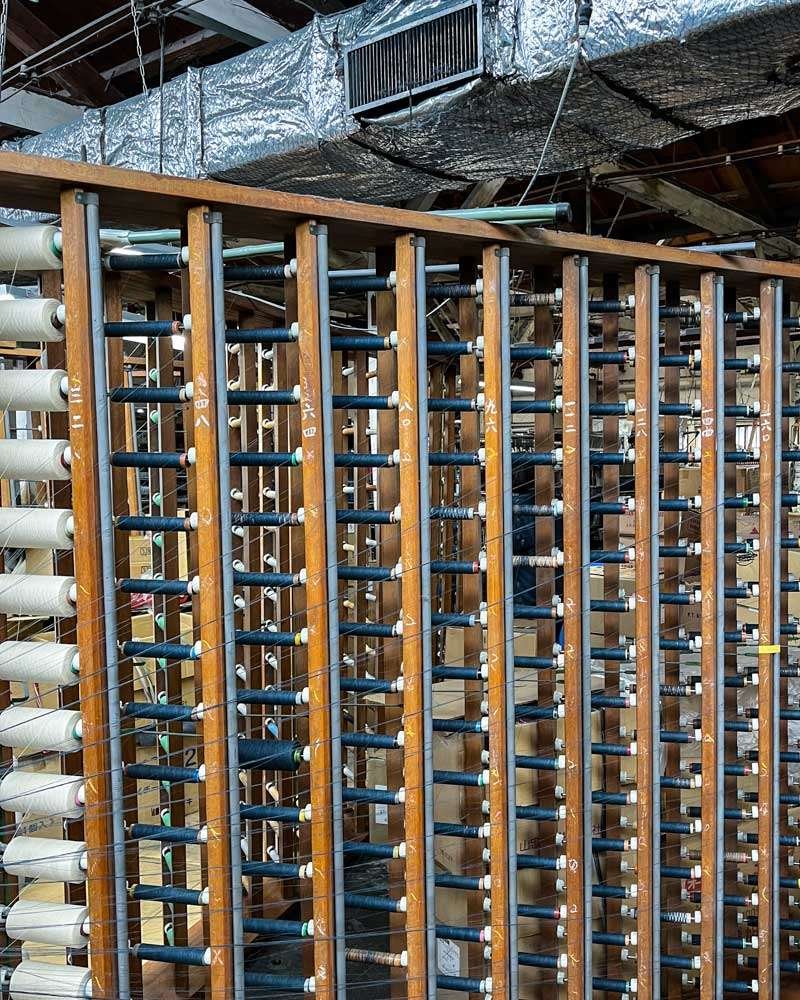 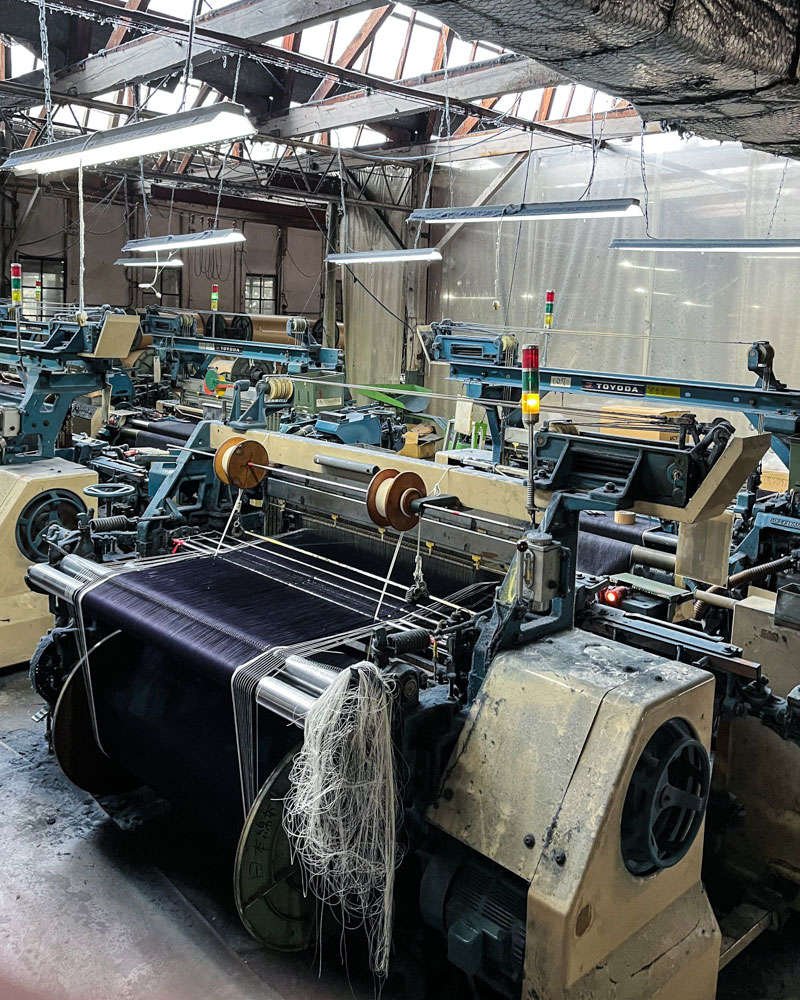 The sound in the main milling building is almost maddening. The basketball court sized building is filled to the edges with an array of shuttle looms, all clattering and clanging in different rhythms and timings. You can’t even hear yourself think. Let alone make yourself understood in broken Japanese to the mill technicians. But we’re not here to talk. The mill building is serious business. All that’s important here is making amazing fabric. That, and keeping these old shuttle looms functioning properly.

See, when the denim industry as a whole moved onto the more cost-effective projectile loom setup the manufacturing, maintenance and replacement parts industry for outdated shuttle looms pretty much dried up as well. There hasn’t been a new shuttle loom made in almost 50 years. So mills like Nihon Menpu have to keep these antiques, some of which are 100 years old, in good working order by any means necessary.

A common identifier of 30 inch denim that has come off a shuttle loom is the white line on the side of the fabric, where the loom has created its "self-edge" (this is where 60 inch denim that was produced on a projectile loom would just have frayed edges). This white edging often has a red stitch within it which is why selvedge denim is sometimes referred to in Japan as akamini or “red ear.” 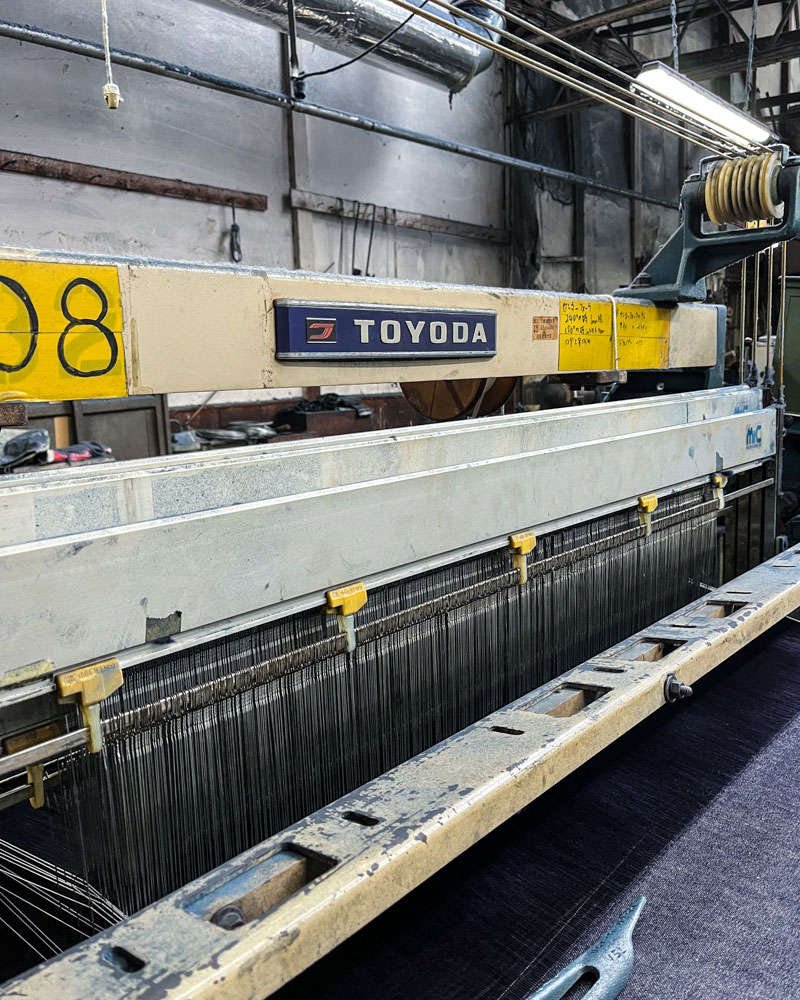 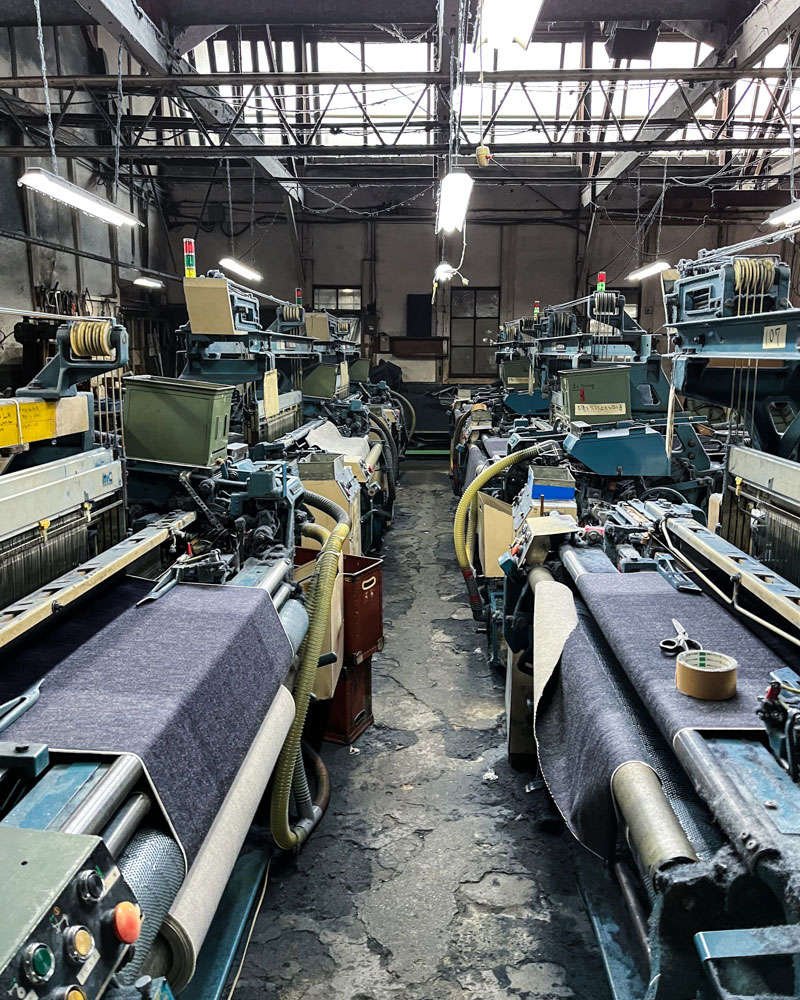 Many of the looms inside the Nihon Menpu factory are made by Inamura Co Ltd. but the bulk of Japan's selvage denim is made on Toyoda looms dating from the 1950s or 60s. Nihon Menpu has over 70 of these. Long before Toyoda became Toyota, the giant of automotive production that we all know and love, they were manufacturing fabric looms like these. They are a key part of Japan's industrial heritage, and are the workhorses of Japan's revival of selvage denim.

But the real pièce de résistance are the 20 Toyoda G10s dating back over 100 years. The veritable holy grail of denim production These are so special, and so highly customized by now, that photos aren’t even allowed. 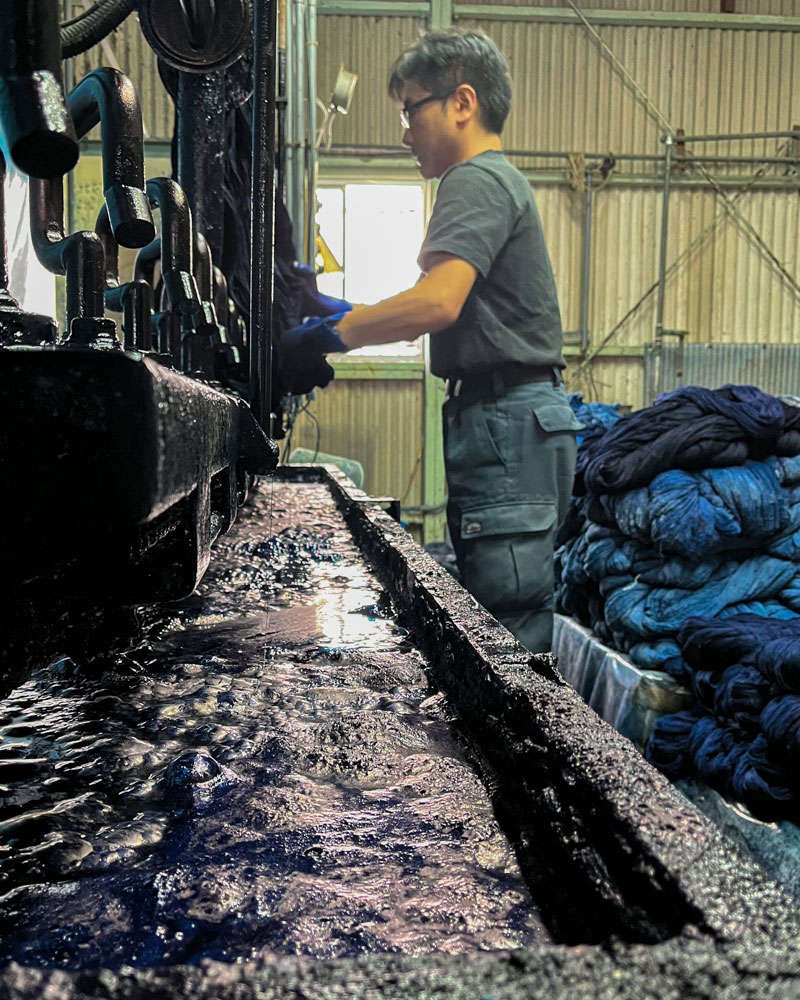 Half an hour later we’re standing in the hank dyeing room. The floor is carpeted in a thick powder of indigo dust. Hank dyeing, simply put, refers to the process of dipping the warp and weft yarns of the denim in an indigo dye that has been derived from the leaves of the Indigofera plant. It’s a very unique process in which colour penetration is maximized and the yarns retain a softer, loftier feel.
The yarn is dipped in the indigo vat and then pulled out, twisted to drain like a mop head, and dropped back in the dye multiple times. Once the desired colour is achieved, the yarn is steamed to fix the dye to the fibres. Because hank dyeing doesn’t use as many chemicals as more modern forms of dyeing, it is less damaging to the material. The final dye colours are also usually richer and more variegated. 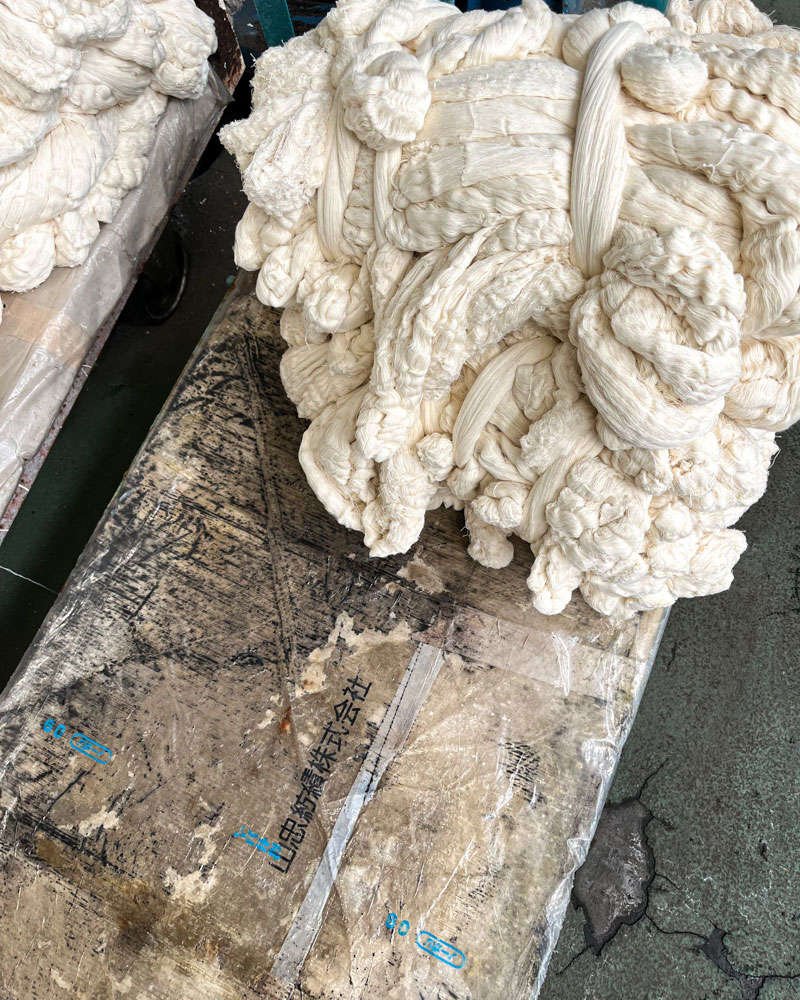 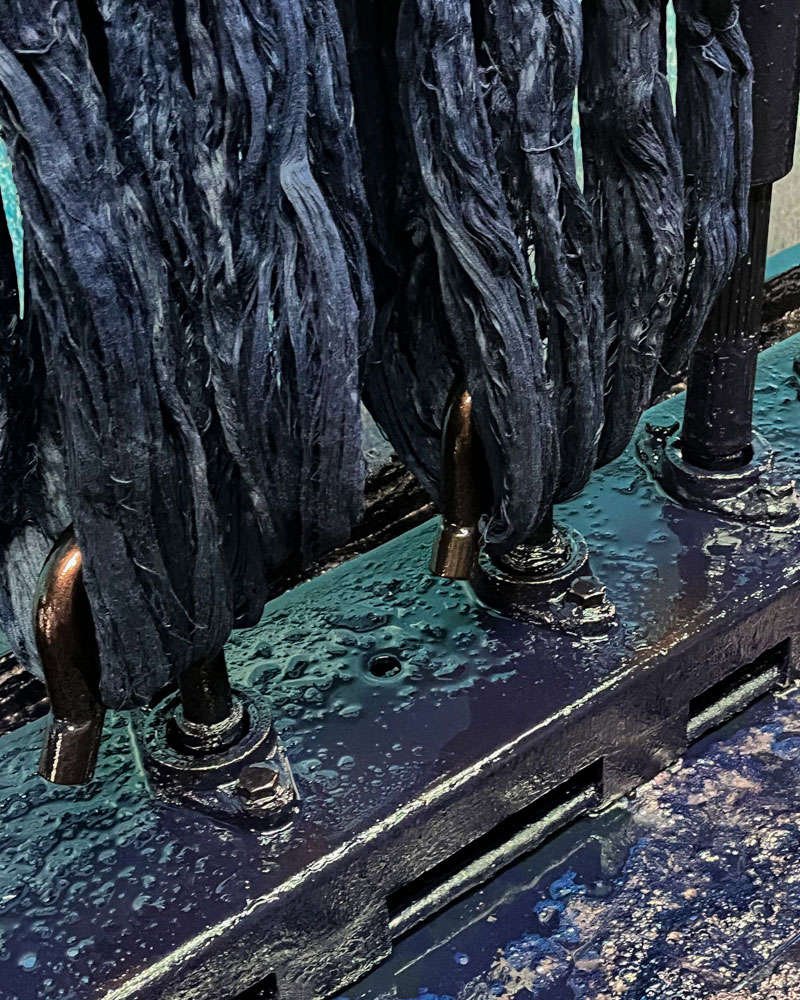 The exact contents of the indigo dye vat at Nihon Menpu are entirely unique and the vat is only drained and replaced with new dye once or twice a year. Otherwise its potency and levels are simply maintained carefully by the dyeing technician. Theirs is an ancient technique that uses Sukumo, the composted leaves of the Japanese Polygonum Tinctorum plant (part of the Indigofera plant family), grown nearby on Shikoku Island.

In this dyeing room, about the size of a small garage, the smell of the indigo is unmistakable. It’s sweet and chalky and almost smells of wet earth. And it’s here where one sees plain off-white cotton transform into the deep blue-jean blue that we’ve all come to associate with denim. 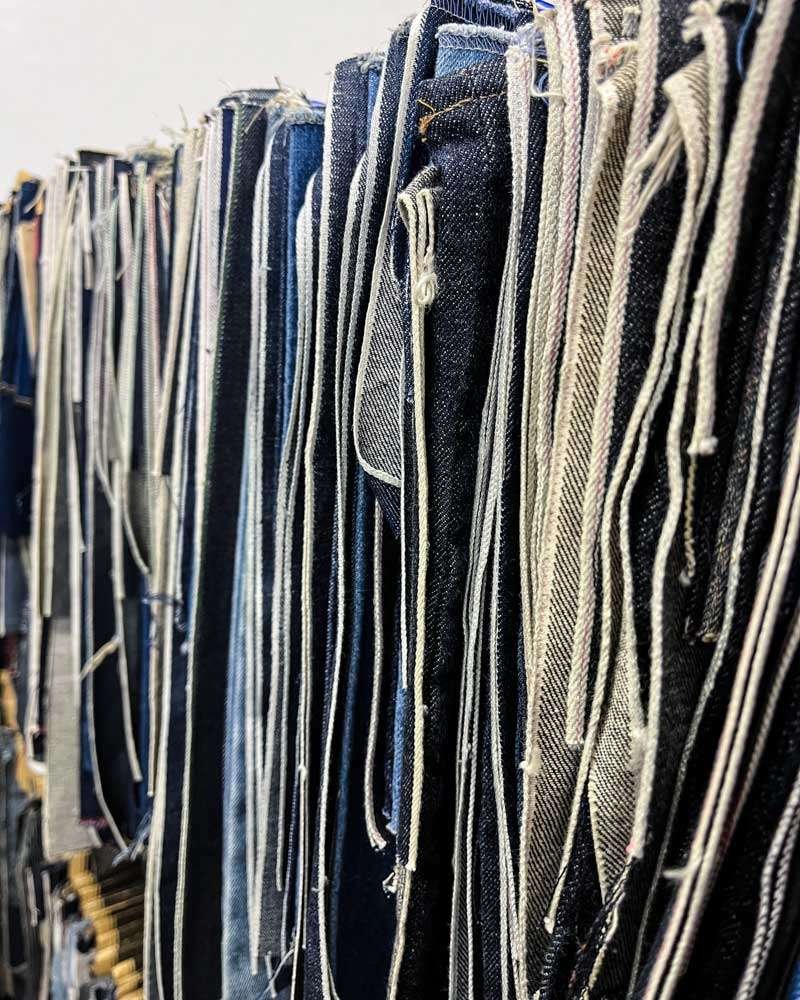 In the 1990s, Japan’s denim revival was officially consecrated with the Osaka Five, a handful of Japanese-based brands (Denime, Warehouse, Studio D’Artisan, Fullcount, and Evisu) that were determined to not only carefully and faithfully reproduce vintage quality jeans but improve on the originals the way that only that Japanese know how. And, naturally, Nihon Menpu was instrumental in the denim supply chain for the Osaka Five.
“It was a simple idea, really: vintage denim was becoming very expensive,” Fullcount founder Mikiharu Tsujita recounted in the book Blue Blooded. “So we thought, ’Why don’t we make denim ourselves?’ Sometimes people think that the idea was just to make replica denim, like in the old days. And, yes, a vintage feel was the original idea, but the denim itself was genuinely original, too.” 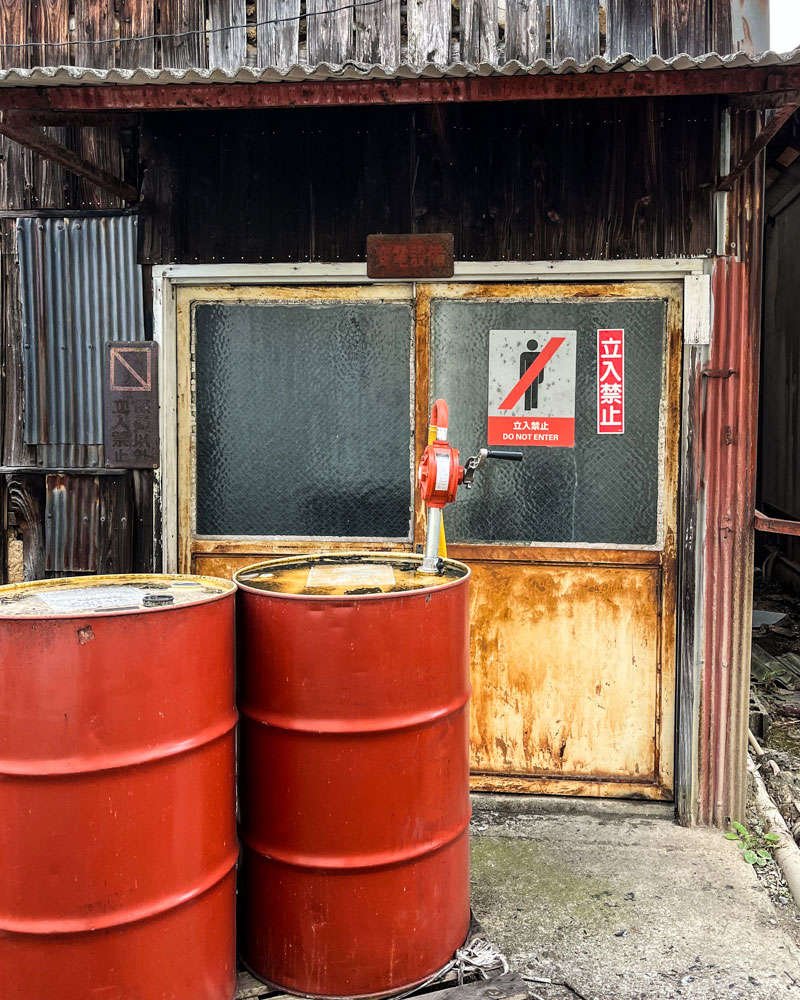 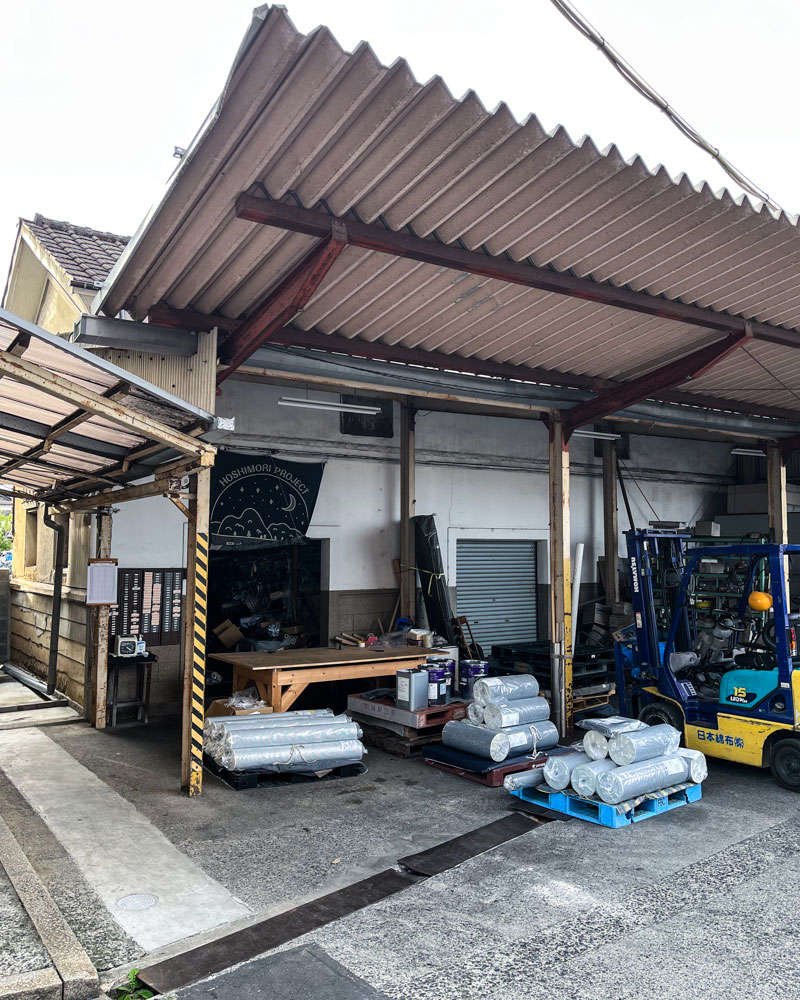 While the Osaka Five have become gods among the international denim cognoscenti, the actual Okayama mills that were spinning the denim for them have seemingly gone overlooked. And, perhaps, the mills themselves wanted it this way. It’s not unlike Japanese craftsmen to derive fulfillment simply from the perfection of the craft itself, rather than through any outside acknowledgement or praise.

But it’s impossible not to praise them. It seems blasphemous to not acknowledge their contribution to the much-needed revival of quality denim. Mills like Nihon Menpu, Kuroki, Kurabo, and Nissinbo were instrumental in Japan’s denim renaissance. And it’s not hard to see why. Combining heritage techniques, vintage machinery and the relentless pursuit of perfection so common in Japanese craft culture has resulted not only in a one of a kind product but also a valuable culture of quality 🔴
Older Post
Newer Post